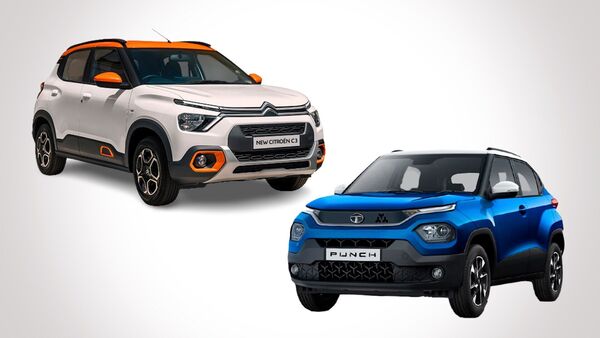 Citroen has launched C3 at a starting price of ₹5.70 lakh, which is slightly more affordable compared to Tata Punch SUV.

Citroen C3, the latest offering from the French carmaker, has been launched in India. On Wednesday, Citroen announced the price list of the C3, which the carmaker calls a hatch with SUV stance. While the auto giant sees the C3 as rival to premium hatchbacks like Maruti Baleno and others, the pricing of the C3 has pitched it right up against the likes of Tata Punch. Both the cars offer similar stance, almost like baby SUVs, and offer similar features in terms of styling, powertrain among others.

Here is a quick comparison, including the price list, between Citroen C3 and Tata Punch.

Both Citroen C3 and Tata Punch come loaded with features such as touchscreen infotainment screen, dual front seat airbags, Apple CarPlay and Android Auto among others. However, C3 is slightly more premium with wireless charging facility, fast charging ports for both front and rear passengers, wireless connectivity among others. In terms of cabin space, Citroen C3 claims to have ‘one of the best legroom in the segment’ for rear passengers. However, C3's boot space at 315 litres is less than 366 litres offered on Tata Punch.

The engines under the hood of the C3 and Punch SUV also have similarities. Both are offered with a 1.2-litre naturally-aspirated petrol engine. The 1.2-litre unit in C3 can generate 82 PS of maximum power and 115 Nm of peak torque. The Punch can churn out maximum output of 86 PS and 113 Nm of peak torque. The engines inside C3 are mated to a five-speed or a six-speed manual gearbox. Tata Punch is offered with both five-speed manual and automatic transmissions.

Where the C3 has an edge over Punch is a turbocharged engine. The turbocharged petrol unit can develop 110 PS of power and 190 Nm of torque.

Citroen C3 claims a mileage of 19.8 kmpl with the 1.2-litre naturally-aspirated engine while the turbocharged version is capable of returning 19.4 kmpl of fuel efficiency. Tata Punch has a certified mileage of 18.9 kmpl.