Citroen C3 was unveiled by the French carmaker for the Indian market some time ago. The carmaker is finally ready to launch the SUV next month and will rival the likes of Tata Punch.
By : HT Auto Desk
| Updated on: 08 Jun 2022, 07:54 AM 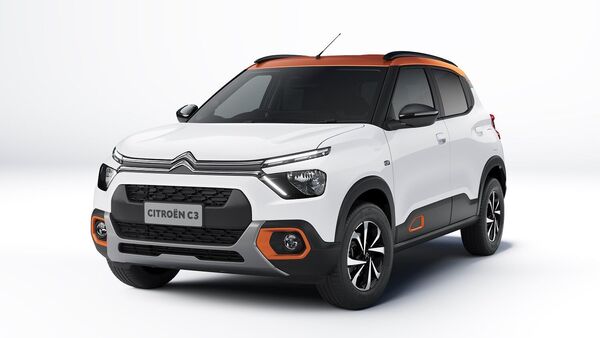 After nearly a year since its unveiling, French carmaker Citroen is all ready to drive in its second product in India. The 2022 Citroen C3 SUV will be officially launched for customers on July 20. The carmaker has also confirmed that the bookings for the C3 SUV will start from July 1. The C3 SUV will join the C5 Aircross SUV in the French carmaker's lineup for Indian customers. Ahead of the launch, several technical details and features about the Citroen C3 SUV has been revealed.

The Citroen C3, which the French call a car 'Made In India for Indians', is based on the Common Modular Platform (CMP). The SUV will be assembled locally at the car manufacturer's facility in Thiruvallur while the engine and transmission will be developed in Hosur, both in Tamil Nadu. Citroen claims 90 percent of the C3's production is localised.

The 3 SUV will come with a wheelbase of 2,540 mm offering ample space for occupants. Citroen promises that the passengers sitting in the rear seats too will have ‘one of the best legroom in the segment’. For the rear seats, there is 653 mm of legroom. Up front, there's 1418 mm for the elbows and 991 mm for headroom.

The C3 also has a wheelbase of 180 mm which should hold well for the small SUV on Indian roads. However, it is slightly less than what its rival Tata Punch offers. The C3 also has a 10m turning radius, making it an easily manoeuvrable vehicle.

Inside, the C3 will offer several features including a 10-inch touchscreen infotainment system, wireless Apple CarPlay and Android Auto, USB fast chargers for both front and rear passengers among others.

Citroen will offer the C3 SUV in three basic trims called Vibe, Energy and Elegance. Under the hood, the C3 will come with two engine options. The first one is a 1.2-litre naturally aspirated petrol unit generating 82 PS of power. The other one is a 1.2-litre turbocharged petrol unit which can churn out 110 PS of maximum power and 190 Nm of peak torque. Citroen claims the C3 can sprint from standstill to 100 kmph in just 10 seconds.