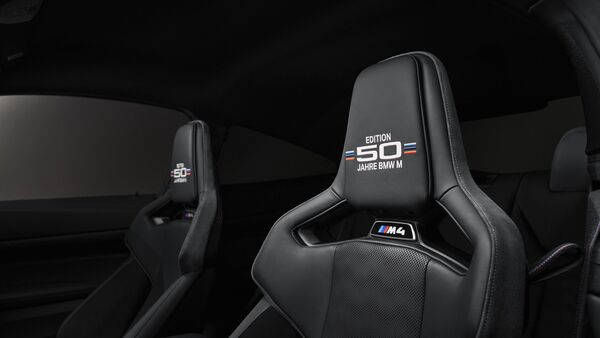 BMW will roll out 10 exclusive models of 50 Jahre M Editions in India as it celebrates 50th year of its iconic M performance brand.

BMW India is all set to celebrate 50 years of its M performance brand with 10 new special edition cars for its customers. The German carmaker has announced that it will launch these 50 Jahre M Edition cars exclusively for Indian buyers in coming days. Though the carmaker has not given any launch timeline of these cars, they are expected to be available soon at BMW dealerships through bookings on its online platform.

BMW is celebrating 50 years of its BMW M GmbH wing, which was earlier known as the BMW Motorsport GmbH. This wing manufactures high-performance BMW cars which are sold in global markets under the M performance brand.

Announcing the initiative, Vikram Pawah, President of the BMW Group in India, said, “M is the strongest letter in the world and in its 50th anniversary it is stronger than ever. Inspired by motorsport, BMW M philosophy is the perfect interplay of dynamics, agility and precision while being suitable for everyday use. However different the vehicles and their drivers might be – we all love the faster heartbeat, the adrenaline and goose bumps triggered by every M car. To celebrate M’s fascinating history, BMW India will launch 10 alluring ‘50 Jahre M Editions’ across the product portfolio. We are also excited to share that later this year we will launch BMW M Certified dealerships, a one-stop-shop for an unbeatable purist experience. Above all, this jubilee is dedicated to drivers, the brand’s friends and all M enthusiasts."

The 50 Jahre M Editions will include special editions of the BMW M340i, BMW M4, BMW M5 among others. The BMW sports activity vehicle (SAV) range will also get its own '50 Jahre M Editions'. The BMW 6 Series and BMW 5 Series will also get their own M Editions in India. The first model that will hit the Indian roads will be the M 340i xDrive model. BMW said it will manufacture the M edition of the model locally at its facility in Chennai, Tamil Nadu. BMW will also launch BMW M Certified dealerships which will be an exclusive one-stop shop for customers looking for BMW M performance cars.

Besides these models, BMW will also offer exclusive customisation options ranging from exterior colour and upholstery on select models. These include colour themes like Dakar Yellow, Fire Orange, Daytona Violet, Macao Blue, Imola Red or Frozen Marina Bay Blue. All of these refer to the various eras of BMW M.