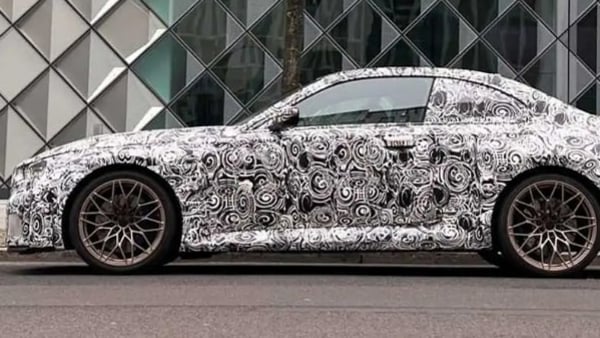 BMW M2 gets a long front overhand and a rear spoiler on trunk lid. (Image: Instagram/bmwm)

BMW has announced that its much-anticipated second-gen M2 will make its official debut in October this year. The Bavarian carmaker has further confirmed that the car will make its appearance with a manual gearbox and a rear-wheel-drive configuration.

The new 2023 BMW M3 is said to be the last of the pure-ICE-powered M car. Under the hood, the car will be plonked with an S58 3.0-litre straight-six which is likely to produce output in the vicinity of 450 horsepower. The engine will come paired to an eight-speed Steptronic automatic or a six-speed manual gearbox. As per the company, the upcoming M2 will sport a similar level of performance as the last-gen M2 CS.

The upcoming M2 will come based on the 2 Series Coupe which first broke cover in 2021. Needless to say, it will sport M-specific suspension changes, bigger brakes, reworked chassis, and performance-oriented interiors, as per the M-spec requirements. In addition to that, it will also feature larger wheels along with grippier tyres, sportier and lighter body kit, and bucket seats to keep the occupants in place.

Speaking with Bimmer Today, BMW M division's CEO Frank van Meel said that the new BMW M2 will arrive as a puristic driving machine. "We will see increasing electrification in other vehicles, of course in different forms, starting with the 48-volt electrical system and plug-in hybrids to fully electric drives. Seen in this way, the M2 will be the last M with a pure combustion engine drive and also without electrification scope such as a 48-volt onboard network, yes," he further added.

The car is expected to hit the international showrooms sometime later in 2022. In the meantime, BMW is preparing to reveal the M3 at the Goodwood Festival of Speed later in June.