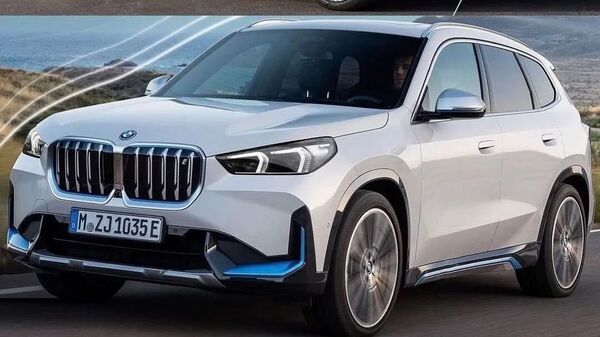 BMW is all set to take the covers off the iX1 electric SUV, which is the electric version of its entry-level X1 SUV. (Photo courtesy: Instagram/@wilcoblok)

BMW will officially unveil its latest electric vehicle iX1 later today, May 31. Ahead of the global debut, the images and features specifications of the iX1 electric SUV have been leaked online, giving a clear idea of what one should expect when the formal unveiling by the German carmaker takes place later today.

The images of the 2023 BMW iX1 have been leaked on social media. It shows the electric SUV without any camouflage with several specifications. It has also leaked the looks of the upcoming facelift version of the X1 SUV, which will be unveiled along with the electric SUV. The iX1 is essentially the electric version of BMW's entry-level compact SUV X1.

BMW iX1 will be equipped with a lithium-ion battery pack with a capacity of 64.7 kWh. The large battery is capable of offering a range of 438 kms on a single charge according to the WLTP methodology. The electric SUV can be recharged through the standard 11 kW charger. Using 130 kW charging facility, the SUV can replenish from 10 percent to 80 percent charge in less than 30 minutes.

In terms of design, the iX1 will come with the traditional BMW kidney grille with the 'i' badging on it to establish it is an EV. The EV credentials are also be accentuated by blue accents on the bumper, the side skirts and other parts of the SUV . The grille is flanked by twin LED headlights and DRLs. At the rear, the SUV gets a prominent iX1 badging as well as LED taillights. Customers will be offered the option to upgrade the LED headlights to get the matrix LED headlights.

The cabin of the iX1 will come with a 10.25-inch curved display, split into two screens for the instrument panel and infotainment functions. The display with will come with the BMW 8 operating system. Within the BMW Live Cockpit Professional, navigation will be equipped with augmented reality. The rear seats will come with 40:20:40 folding ratio which will help the boot space to increase from 540 litres to a massive 1,600 litres.