A video released by the British luxury carmaker reveals new design elements of the 2021 Bentayga SUV.
By : Sabyasachi Dasgupta
| Updated on: 24 Jun 2020, 09:14 AM 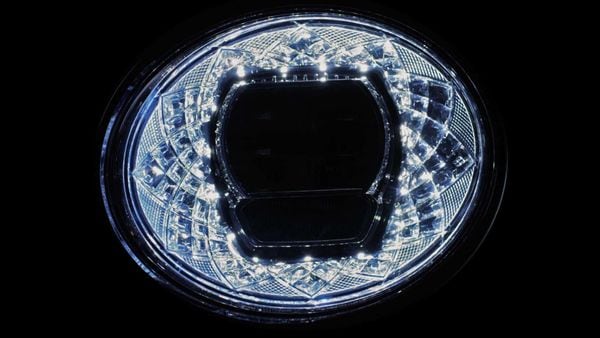 Design of the new LED headlight that the Bentley Bentayga SUV is going to sport.

British luxury carmaker Bentley is all set to reveal the new Bentayga SUV on June 30. Ahead of the launch, the carmaker has released a short video highlighting some of the elements of the facelift SUV.

The video only gives a glimpse of the wheels, the steering, the headlight and some of the dials on the dashboard. No more details have been officially revealed through the video.

However, according to recent leaks, the new Bentayga SUV will sport a new-look centre console, new rectangular ventilation nozzles and a redesigned touchscreen infotainment system.

The Bentley Bentayga facelift is set to get a flatter front grille with a clear influence of the new Flying Spur, and the headlights that also adopt the LED Crystal Star Matrix system.

The SUV also seems to wear a new bumper, with a refreshed design of the side air intakes or the central one shaped like a trapezoid. In the rear, the changes will also affect the optical groups with a new design inspired by the luxury saloon.

The new Bentayga SUV will come with a choice of seating configurations and powertrains, including a plug-in hybrid. However, no detail about the powertrain has been revealed yet. The current models have a W12 or a V8 engine under the hood. The twin-turbocharged 6.0-litre W12 engine can produce 600 bhp of power and 900 Nm of torque. It can push the SUV to hit zero to 100 kmph in 4.1 seconds and a top speed of 301 kmph.

The Bentley V8 engine also delivers an impressive 542 bhp of power that can take it to a top speed of 290 kmph. The V8 engine achieves its maximum torque of 770 Nm at 1,960 rpm and maintains this right through to 4,500 rpm, ensuring rapid acceleration at any engine speed and a zero to 100 kmph sprint in 4.5 seconds.

The launch of the new Bentayga was earlier slated to take place at the Beijing Motor Show, however, the unprecedented situation created due to the coronavirus outbreak delayed the launch indefinitely.

The new Bentayga SUV will be the first car launched under Bentley’s new Beyond100 business strategy, a journey that will see the company become the world leader in sustainable luxury mobility.