Indian auto industry's worry about the disruptions in the supply chain is in line with the global auto industry.
By : HT Auto Desk
| Updated on: 03 Apr 2022, 03:23 PM 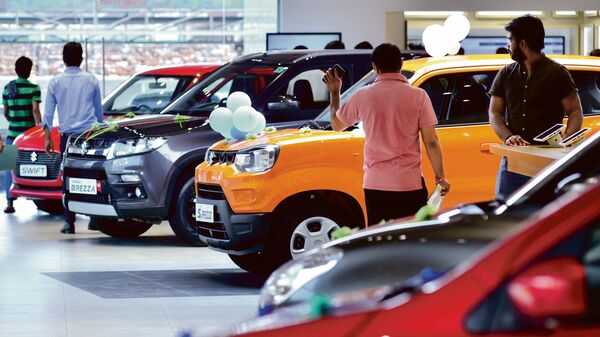 Automakers in India are worried about the deepening supply chain crisis.

Several carmakers in India reported a sharp increase in annual vehicle sales in the FY2022, which ended on Thursday. But, despite the improving sales scenario, automakers have warned of future risks from global supply chain disruptions. The key disruption among these is going to be the microchip shortage, owing to the ongoing war between Russia and Ukraine.

Maruti Suzuki, India's largest carmaker has reported a 13 per cent hike in its sales in the last fiscal, with 1.65 million units sold. The automaker registered its first sales growth in two years. But the auto company warned that the supply situation of electronic components continues to be unpredictable. Maruti Suzuki expects the disruption to impact the production volume in the current financial year.

Another key automaker in India, Tata Motors too reported its highest-ever annual sales of passenger vehicles in the last fiscal. Tata Motors' sales surged by 67 per cent to 370,372 units from a year ago. Its electric car sales too increased nearly four times to 19,000 units.

Indian auto industry's worry about the disruptions in the supply chain is in line with the global auto industry. Globally, the automakers have been forced to make steep production cuts over the past year as supply chain disruptions and high demand for consumer electronics have resulted in an acute shortage of semiconductors. With the modern cars heavily relying on microchips, this shortage resulted in a long waiting period for car buyers, as production has been impacted in the auto industry.

The situation in the chip manufacturing industry was normalising gradually when the Russian invasion of Ukraine further deteriorated the situation. Both Russia and Ukraine are key suppliers of crucial raw materials that are used to manufacture semiconductors. The newly evolved crisis has now further darkened the future of the microchip industry and the auto industry as well.

Speaking about this, ICRA has said that the impact of the crisis in the form of higher fuel and commodity prices poses a risk to automobile demand prospects, in case it materialises into a long-drawn-out war.