Audi will launch the new Q5 SUV for the Indian markets next month after more than a year since it was discontinued. It is now armed with a BS 6 compliant engine and a host of changes on the inside as well as the outside.
By : Sabyasachi Dasgupta
| Updated on: 29 Oct 2021, 12:17 PM

Audi Q5 2021 facelift SUV will be launched in November, and will take on rivals like BMW X3, Mercedes-Benz GLC and even the newly-launched Volvo XC60 facelift. (Photo: Sabyasachi Dasgupta/HT Auto)

The Q is back and Audi is betting big on the new 2021 Q5 facelift SUV to bring back the good old days. After most of the Q Series SUVs were withdrawn when BS 6 norms kicked in, Audi switched to electric launching as many as five among eight cars it launched in India. But with the new Q5, Audi has made it clear that it will not desert the petrol-heads any time soon.

When we landed in Lonavala last weekend to experience the new Q5 first hand, the thought was why Audi is launching another ICE car, when the company is on a launching spree of EVs, the most done by any luxury carmaker in India. The Q5 was among the five Qs that drove Audi's sales in India. It dwindled in recent times, before picking up pace this year with more than 133 per cent of growth. And it isn't the electric cars that are driving the numbers, because the existing Q line of models contribute almost half of what Audi sells.

It became quite clear why Audi decided to bring back the Q5 with a BS 6 engine. Audi took the opportunity to also revamp the SUV which once formed the sales backbone for the Germans.

When the covers went off the Q5 formally it was pretty evident that the SUV is not just a facelift. That Audi has worked on the looks too became clear with a striking new and wider single-frame octagonal grille. Honestly, I was expecting the same grille that is being used for the global model. But Audi said Indians love the chrome elements more. Either way, the new grille, coupled with the new set of LED headlights and DRL units looked much sharper than the previous generation.

The dimension of the new Q5 has not changed much. While Audi has not shared the full spec list with us yet, reserving it till the launch, I was told it has grown in length by about 19 mm. From the sides, the new Q5 has not changed much except for the new side skirts and the roof rails finished in aluminium, complemented by similar treatment along the window-line as well.

The wheels have also been upgraded now. They have grown to 19-inch with a new 5 double-spoke alloys, which looked quite stylish in white.

There are updates at the rear too. Audi has now added an aluminium strip across the boot lid along with a new set of LED tail lamps. The boot space is large enough to fit in about 550 litres of luggage. The higher-spec Technology trim also offers comfort-key which can unlock the SUV remotely or open the boot through gesture control. But the feature is missing in the Performance Plus trim. 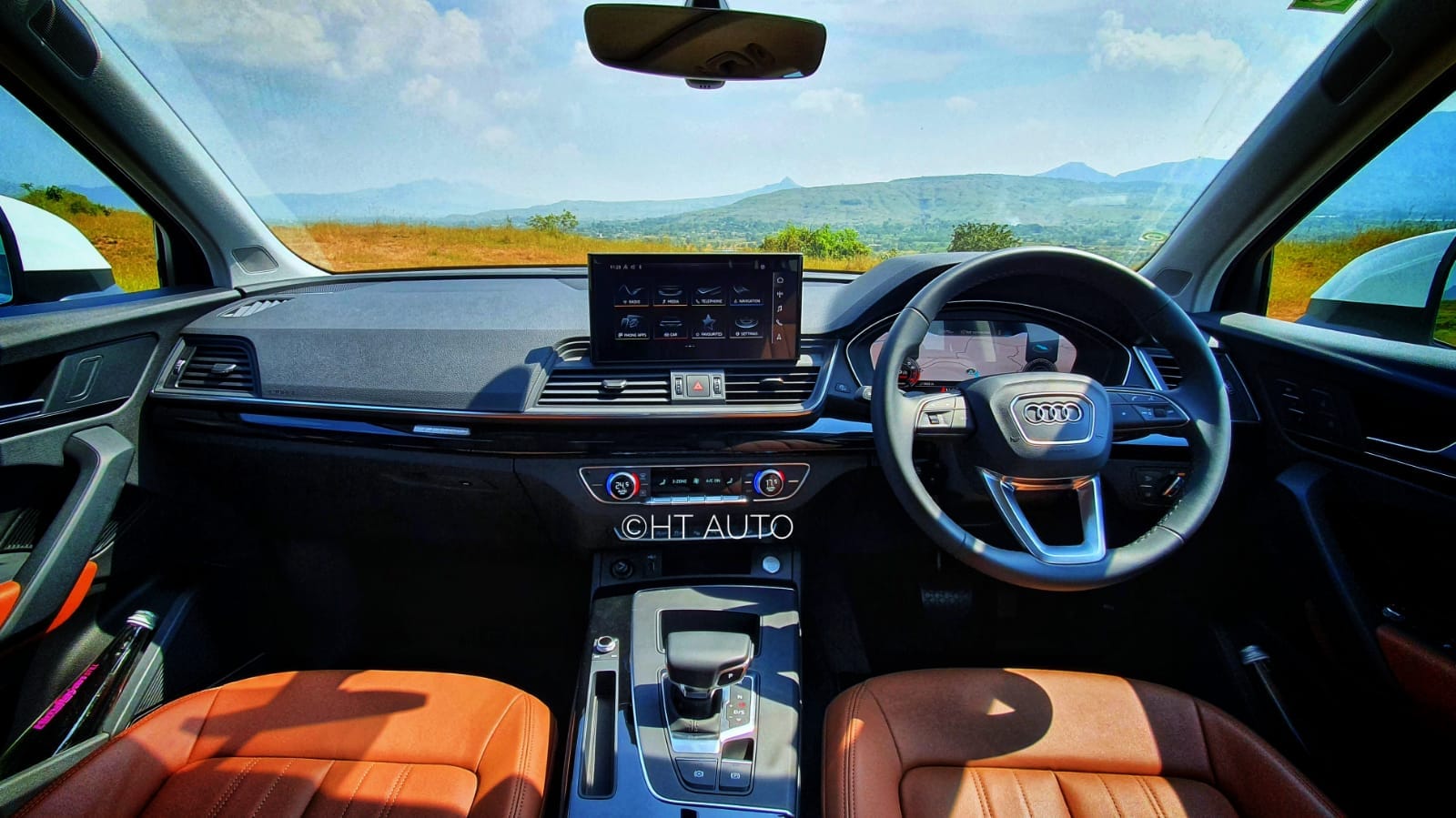 Audi Q5 offers a new-look cabin with a host of changes, including a giant 10.1-inch infotainment screen.

Step inside, and you will realise Audi means business even if the new Q5 is a facelift with a new engine basically. There is a new dual-tone theme available in two choices. I got the Performance Plus trim to test which had tan leather upholstery combined with black interior colour interspersed with piano-black finishing. The Technology trim offers black-and-beige theme. It now looks more simplistic and clutter-free than before with a driver-oriented wraparound cockpit as well as a sense of space.

The biggest update though is the new 10.1-inch touchscreen with the third generation Modular Infotainment Platform or MIB 3. I remember when Audi came out with Q2, the size of the infotainment screen was a bit disappointing. But the Germans have made it up with the new one in Q5, which ideally should be part of any Q Series SUVs.

The screen offers haptic feedback, gets Audi's latest MMI Touch, voice controls, supports Apple CarPlay and Android Auto besides almost all the controls you need just a click away.

The leather and leatherette seats on offer are also pretty comfortable. The front seats also gets buttons to electrically adjust them to one's liking. But there is no option of ventilated seats, which is slightly disappointing in a car of this range. The rear seats are spacious enough for at least two occupants. But it will be a squeeze to fit in a third due to the protruding driver armrest and a large hump on the floor.

Audi has added a new phone box for wireless charging under the armrest. It also has some more storage space, and a charging port compatible with USB-C type of cables. This is besides another regular USB port right under the climate control on the dashboard. But sadly, the rear passengers do not get a single USB port to charge their devices.

The digital driver display, housed within a 12.3-inch screen, shows all the drive-related information and navigation. It also offers different views, which you can switch between with just a click of a button on the steering wheels.

There is also a large panoramic sunroof, 30 choices of ambient colours to choose from and the Bang and Olufsen music system. If you go for the higher-spec trim, you will get a 19-speaker with 755 watts output and 3D sound effects, instead of the 10-speaker 180-watt system in the Premium Plus trim.

THE DRIVE: IMPROVING WHAT WAS BETTER Audi has introduced the 2.0-litre 45 TFSI petrol engine with Quattro technology in the new Q5. It also gets a tweaked suspension with damping control to reduce body roll.

You don't need to fix something which isn't broken yet. However, this is one department where Audi is constantly trying to improve things that are already good. There is a 2.0-litre 45 TFSI petrol engine throbbing under the hood, the same that powers the A6. It has been tuned further for improved drive dynamics. Thanks to the Quattro all-wheel drive technology, you will never find this SUV wanting on power or delivery at any point. But what Audi has also done is to add damping control to the suspension. It has not only helped to soften all the bumps on potholes or an off-road patch like this one, but has also reduced the body roll while attacking corners at high speeds.

It can generate 249 hp of power and 370 NM of torque. It offers five different drive modes which include Comfort, Dynamic, Individual, Auto and the new Off-Road mode. It can hit up to 237 kmph as top speed and returns a mileage of 17.01 kmpl, which is certified by ARAI.

The transmission is handled by the usual seven-speed Steptronic automatic gearbox, as responsive as you would like it, provided you are using the right drive modes at the right places. Even in uphill sections like these, I found it quite effortless in pulling a big SUV of this size with relative ease.

The leather-wrapped three-spoke steering wheel feels nice and quite Audi-like. It may seem a bit lighter to some, but is as precise as any Audi wheels can get. From taking sharp u-turns to controlling the SUV at high speeds, it evokes the confidence you need.

The new Q5, like most other Audi SUVs, offers a good option for every day drives around the city, and can also be a good option to take it for light off-roading some time. No wonder Audi is betting big on the Q5 to ramp up its sales numbers in coming days. While the previous model was priced around the ₹50 lakh mark, expect a few lakh premium for the facelift version. Question is: Is it good enough to take on rivals like the BMW X3, Mercedes GLC or even the newly-launched VolvoXC60? Only time will tell.