With just 1,250 miles covered, the 2003 Ferrari Enzo is reportedly in pristine condition.No car has ever commanded such a high price tag in an online-only auction as this particular model.
By : HT Auto Desk
| Written By : Shubhodeep Chakravarty
| Updated on: 10 Jun 2020, 12:13 PM 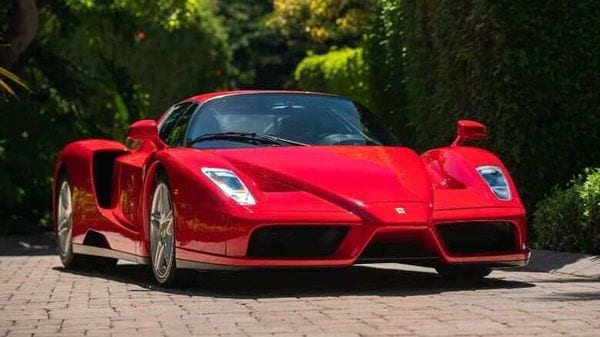 Only 400 units of Ferrari Enzo were ever produced. (Photo courtesy: Twitter/@rmsothebys)

A 2003 Ferrari Enzo has broken all records as far as online-only auctions of supercars go by commanding a final price of a whopping $2.64 million (approximately ₹20 crore) at a digital event held recently by RM Sotheby's.

At one point in time, the Enzo was the flagship model of Ferrari and continues to be revered by automotive enthusiasts the world over. With 400 units ever produced, and the final unit presented to Pope John Paul II by the company, the iconic vehicle enjoys a place of high distinction. While that particular 400th unit was auctioned by RM Sotheby's in 2015 for an astounding $6.05 million, another unit has now shattered records for being the highest-priced car ever auctioned in a dedicated online only collector car auction.

The supercar in focus reportedly clocked just 1,250 miles and boasts of two-tone racing seats making it even more rare in an exclusive club of its direct siblings. At the auction, it managed to command a price which is four times its original sticker price of around $652,000. The winner of the auction is now just the third owner of the pricey machine on wheels.

Ferrari Enzo continues to be an extremely capable sportscar despite the several years since it was first launched. (Photo courtesy: Twitter/@rmsothebys)

Even if nearly 17 years have passed since the Ferrari Enzo supercars were first showcased and then sold, it remains a very capable vehicle on the road. This is thanks to a naturally-aspirated 6.0-liter engine which belts out 651 hp of peak power and has peak torque of 657 Nm. The car rushes to the 100kmph mark in 3.3 seconds and has a top speed of 350kmph.

#RESULTS: Our Online Only: Driving into Summer auction saw great success this past week with $16.4M in sales, led by a 2003 #Ferrari #Enzo at $2.64M, becoming the most valuable car sold in a dedicated online only #collectorcar auction! Complete results at https://t.co/9d2Q4UYnH7. pic.twitter.com/chCmbjbzza

"We are extremely pleased with the results of our first Online Only collector car auction curated specifically for the digital platform," said Gord Duff, Global Head of Auctions, RM Sotheby’s. "The sale of both the Ferrari Enzo and 288 GTO mark a significant milestone for what the RM Sotheby’s Online Only platform can achieve, as well as the confidence with which our clients can bid."