Aston Martin Valkyrie hyper car has been teased ahead of its official debut today.

British luxury carmaker Aston Martin is all set to take the covers off the new generation Valkyrie hypercard later today. Ahead of the official debut, the carmaker has teased the 2022 Valkyrie in action on race tracks. The hypercar was developed by Aston Martin in collaboration with Formula 1 team Red Bull Racing.

The Valkyrie's hybrid powertrain consists of a 6.5-litre naturally aspirated V12 engine and an electric motor. A seven-speed automatic transmission directs power to the rear wheels. It is capable of producing a staggering 1,000 horsepower. The battery-electric system, designed by Rimac and Integral Powertrain, provides an additional 160 horsepower. Combined, the power sources produce a total output of 1,160 horsepower and almost 900 Nm of peak torque.

Aston Martin's Valkyrie AMR Pro features the same powertrain, but the V-12's calibration has been adjusted to increase production. The AMR Pro has a lighter curb weight than the road car, and Aston Martin claims it is capable of generating more than its own weight in downforce.

The Aston Martin Valkyrie offers seating for two. The cabin is shaped like a bucket, with passengers seats placed in a reclined position. It is similar to the seating position in modern Formula 1 race cars. A four-point harness is standard and a six-point harness is available for those who plan to spend a lot of time on the track. 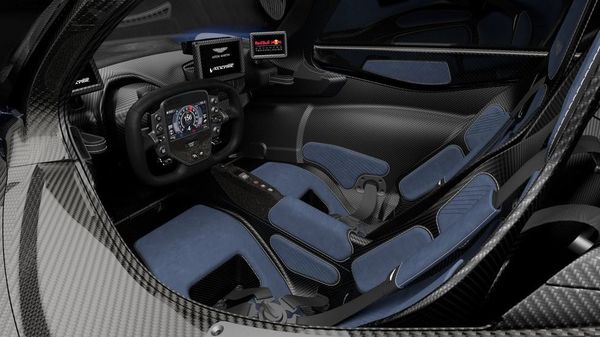 To reduce distraction and driver hustle, all of the car's switchgear is placed on the steering wheel, with vital signs reflected on a single OLED screen. Switches are offered in anodised silver, black or red. Aston offers a wide range of upholstery colours, patterns and finishes, and the seat harnesses come in a choice of six striking shades.

While the DBX remains Aston Martin’s most popular offering, James Bond’s carmaker of choice plans to scale up production of the Valkyrie models as well. The deliveries of the new 2022 Valkyrie models are expected to start soon.