After Swift, Maruti Baleno too fails to pass crash test with zero rating

The Made-in-India Maruti Baleno premium hatchback, with two airbags, was tested by the Latin American agency Latin NCAP where it achieved zero stars.
By : HT Auto Desk
| Written By : Sabyasachi Dasgupta
| Updated on: 29 Oct 2021, 08:54 AM 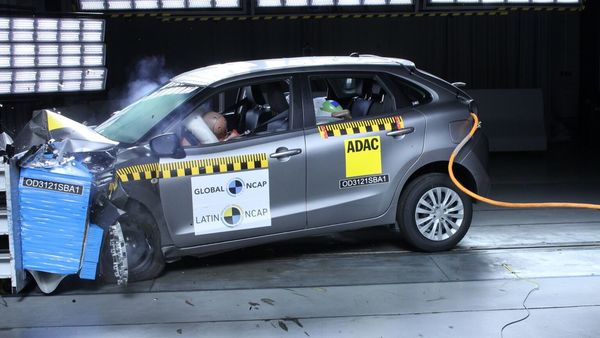 Baleno's failure to pass global crash tests comes months after Maruti Swift also failed the Latin NCAP crash tests with similar result. Swift too had scored zero rating. Both Baleno and Swift are two of the most popular premium hatchbacks on sale in India and drives great volumes for India's largest carmaker.

While the Baleno showed stable structure performance in frontal impact test, it showed high intrusion in the door with poor protection to the chest of the adult door during the side impact test.

Alejandro Furas, Secretary General of Latin NCAP, said“Baleno’s zero star is part of an ongoing disappointment, after the Swift’s zero star rating some weeks ago. With specially poor safety performance in adult and child occupant protection on offer from Suzuki as standard to Latin American consumers."

Stephan Brodziak, Chairman of Latin NCAP, said, “It is unfortunate to have another zero stars car from Suzuki, in this case the Baleno model, which in some countries is marketed as 'Good, Nice, Baleno', to which we should add 'Low safety'."

Maruti Baleno is available in Indian markets in as many as 9 variants. Baleno is priced from ₹5.97 lakh (ex-showroom) and go up to ₹9.33 lakh (ex-showroom) for its top-spec trim. It comes with two airbags for the driver and front passenger as standard across all trims.