2023 Mercedes GLC facelift SUV is bigger and more powerful than its predecessor. It is offered in both petrol and diesel engines mated to mild-hybrid system. It will also have a dedicated PHEV variant.
By : HT Auto Desk
| Updated on: 02 Jun 2022, 08:58 AM 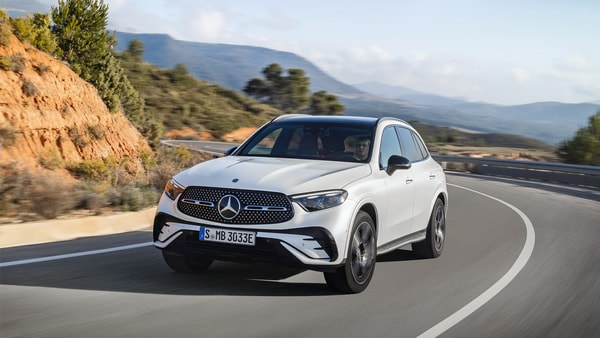 2023 Mercedes GLC will come powered with both petrol and diesel engines with a 48V mild hybrid system.

Mercedes-Benz has taken the covers off the second generation GLC midsize SUV. The new generation GLC is based on the same platform as the C-Class sedan. The 2023 Mercedes GLC facelift SUV has grown in size compared to its predecessor, comes with a new design upgrades and wide range of hybrid engines mated to either petrol or diesel units. The new Mercedes GLC SUV in its new avatar will renew rivalry in the luxury SUV segment with heavyweights such as the BMW X3, Audi Q5 or Volvo XC60.

The new generation GLC is now bigger in size compared to the outgoing model. The SUV now measures 4.72 meters, six cms more than before. It is the same width and height as the outgoing model, which measures 1.89 metres and 1.64 metres respectively. But the wheelbase has gone up to 2,888 mm.

In terms of design, the new GLC facelift SUV gets a redesigned grille and bumper at the front along with new headlights. The SUV stands on a set of 18-inch wheels which can be upgraded to 20-inches in case someone is interested to buy the AMG version of the new GLC. At the rear, the taillights have become slimmer while the bumper has also been upgraded.

The interior of the new GLC is quite plus as expected and comes loaded with all the latest tech seen inside new generation Mercedes cars. There is a floating screen on the dashboard which houses the 11.9-inch touchscreen infotainment display with the latest MBUX system and a 12.3-inch digital instrument cluster. In terms of space, the new GLC will offer more boot space. It now offers 460 litres, up from 395 litres, thanks to a larger wheelbase. 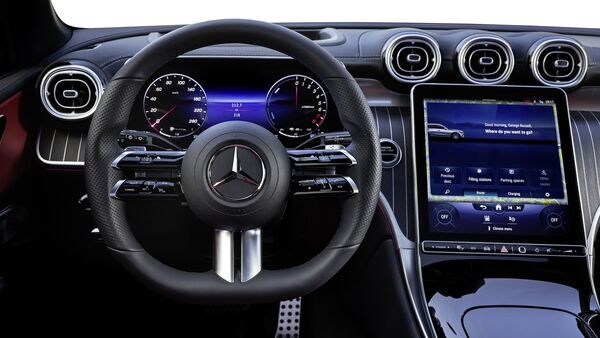 The interior of the GLC facelift SUV has also ben upgraded with the latest technology.

All the engines are paired to a 9-speed automatic gearbox.

The battery has a capacity of 31.2 kWh. The maximum WLTP electric range is 120 kms. The car can be fully recharged in just half an hour through a 60kW charger.

Among the safety features is Active Distance Assist DISTRONIC with Active Steering, which is an active cruise control that works in combination with the lane keeping system to offer an automatic guidance function. There is also an Intelligent parking system, a semi-automatic parking system whose operation has been improved compared to the previous model, is now more intuitive thanks to the implementation of a multimedia system with a larger screen.