Ford has revealed the seventh generation of the Mustang. It will be sold with a 2.3-litre Ecoboost engine and a 5.0-litre Coyote V8.
By : HT Auto Desk
| Updated on: 15 Sep 2022, 13:54 PM
The 2023 Mustang retains its iconic design. It will be offered in two engine options.
View all Images

1/6
The 2023 Ford Mustangs are finally here. They are three versions, Mustang, Mustang GT and Mustang Convertible.

2/6
Mustang GT gets quad exhausts, rear spoiler and GT badging at the rear.

3/6
Mustang GT Convertible comes with one-touch activation for the roof. It gets a single-handle center latch that opens and closes the fully lined and insulated fabric roof.

5/6
The Mustang GT gets unique front-end design with a more aggressive design. The aerodynamics are optimized further with hood vents and a tweaked front splitter. The GT trim gets 19-inch alloy wheels as standard.

6/6
Ford will also be offering Bronze Design Series Appearance Package with the Mustang.

Ford has finally taken wraps off the seventh generation Mustang at the Detroit Auto Show. The iconic muscle car gets a heavily redesigned exterior as well as interior. But Ford has retained the low-slung character design of the Mustang because of which it is instantly recognizable. The Mustang will be sold with an Ecoboost powertrain and a 5.0-litre V8. There will be a standard Mustang, a GT version, GT Convertible and a new Dark Horse trim. Ford has retained the S550 platform from the previous generation Mustang.

The 2023 Mustang looks sharper and sleeker because of its edgier design. It gets a new set of headlamps and tail lamps that look modern. It still has an aggressive-looking grille design with a Pony badge and a long sloping hood design. There are new alloy wheels and a rear bumper design. 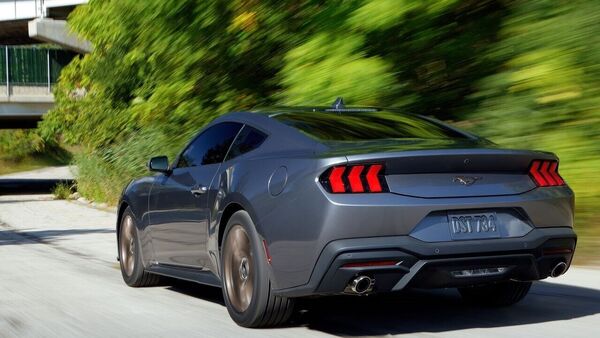 The rear tail lamps on the 2023 Mustang have been revamped.

The alloy wheel size will start at 17-inches, the GT will get 19-inches and there will be an optional 20-inches on offer as well. Ford will offer 11 exterior options and customers can also choose the colour of brake calipers. Moreover, the manufacturer has also introduced Mustang Design Series through which the customizations will be done straight from the factory. There is also a new Bronze Design Series Appearance Package.

Ford will be offering the Mustang with the 5.0-litre V8 which is now in its fourth generation. The manufacturer has made changes to the engine such as a dual air intake box and dual-throttle body design. There are different drive modes and the engine comes mated either to a six-speed manual gearbox or a 10-speed torque converter automatic transmission.

There will also be a 2.3-litre Ecoboost engine on offer which be offered with the 10-speed automatic transmission only. As of now, the power figures have not been revealed by Ford.

Well, the previous generation of the Mustang was brought to India and it was an instant hit in the market. However, now Ford is no longer operating in the Indian market. They did say that they will be bringing some vehicles through CBU like the Mustang Mach-e. However, there has not been any update on this situation since the announcement.