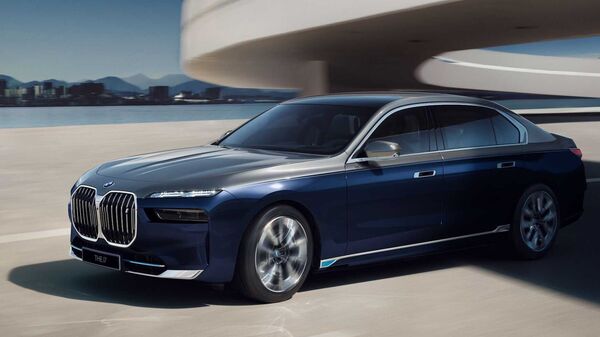 The 2023 BMW 7-Series First Edition is available in three different variants in Japan, which are the 740i Excellence, the 740i M Sport, and the fully electric i7 xDrive60 Excellence.

BMW has unveiled its 2023 BMW 7-Series First Edition, which appears to be influenced by the colour theme of the Mercedes Maybach models. The automaker has started receiving orders for the car for the Japanese market. Available in a limited number, the 2023 BMW 7-Series First Edition comes as one of the most important cars from the brand. The German luxury car marquee claims that it is the most important 7-Series ever. It is slated to come with a full electric counterpart BMW i7 as well.

In terms of design, the 2023 BMW 7-Series appears to have taken a giant leap from the outgoing model. The car gets quirky split LED headlights, a revised front grille, and a sculpted bumper among other styling elements.

BMW Japan claims that all these First Edition models will arrive with 31.3-inch 8K panoramic display for the rear occupants. The massive entertainment display is paired with a 40-speaker and 32 channel 1,965 watt Bowers & Wilkins audio system. It gets the coveted merino leather seats in varying hues.

Speaking about the powertrain, the 2023 BMW 7-Series gets a 3.0-litre turbocharged inline-six engine with a 48-volt mild-hybrid assist. This engine is capable of churning out 375 hp of power and 540 Nm of torque.

The BMW i7 on the other hand gets dual electric motors each powering one axle. The electric powertrain onboard the i7 comes generating 536 hp of power and 744 Nm of torque. BMW claims that the i7's 101.70 kWh battery pack enables the car to run a 483 km range on a single charge.