Skoda launched the Kodiaq facelift SUV in India on Monday at a starting price of ₹34.99 lakh. It has made a comeback to the Indian markets after a gap of almost two years.
By : HT Auto Desk
| Updated on: 12 Jan 2022, 09:16 AM 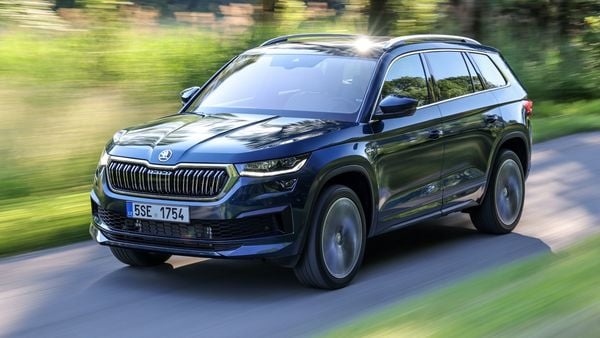 2022 Skoda Kodiaq facelift SUV has been launched in India at a starting price of ₹34.99 lakh (ex-showroom).

It took less than a day for Skoda to sell out the new 2022 Kodiaq facelift SUV in India. The Czech carmaker launched the second generation Kodiaq SUV on Monday for Indian customers. Brought as Completely Knocked Down (CKD) unit, Kodiaq SUV was launched at a starting price of ₹34.99 lakh (ex-showroom).

The new Kodiaq SUV was introduced earlier in global markets. In its new generation, the 7-seater SUV now comes with an upgraded engine besides other design and technical updates. After being withdrawn two years ago due to BS 6 norms, Skoda has now put a BS 6 compliant 2.0-litre TSI petrol engine under the hood. This is the same unit that powers other Skoda models like the Octavia and Superb.

The engine comes mated to a 7-speed DSG automatic transmission. It can generate maximum output of 190 PS and 320 Nm of maximum torque. Skoda claims the new Kodiaq can accelerate to 100 kmph in just 7.8 seconds.

2022 Skoda Kodiaq also received changes besides the engine. As far as design is concerned, the new Kodiaq facelift comes with a redesigned hexagonal grille with chrome surroundings, flanked by crystalline LED headlights. It also gets a new set of dual-tone alloy wheels, a functional roof rail and new wraparound LED taillights.

The cabin of the Kodiaq has also undergone certain changes. It now comes with a black and beige dual-tone theme. There is an 8-inch touchscreen infotainment system which has inbuilt navigation and wireless connectivity, a 10.25-inch digital instrument cluster, three zones automatic climate control system and 12-speaker Canton sound system, ventilated front seats with cooling and heating functionality, ambient lighting and an electrically operated panoramic sunroof. It also gets a two-spoke steering wheel.

In terms of storage, Skoda Kodiaq facelift SUV comes with an illuminated and cooled glovebox at the front as standard. It also gets 270 litres of boot space with all seven seats up. The boot space can be expanded to 630 litres with the third row seats folded and up to 2005 litres of luggage space with the last two rows folded down.