Maruti Suzuki is all set to launch the facelift version of the six-seater XL6 MPV, days after driving in the seven-seater Ertiga facelift. It will rival the likes of Kia Carens among other three-row offerings.
By : Sabyasachi Dasgupta
| Updated on: 20 Apr 2022, 01:19 PM 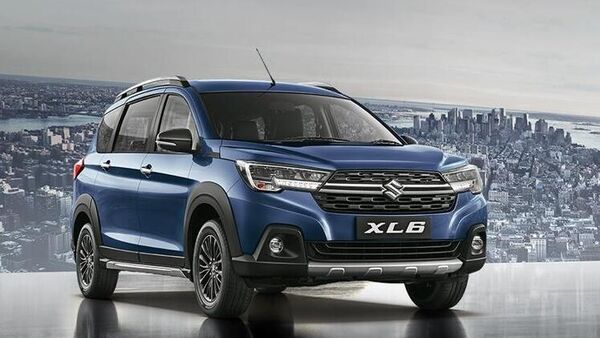 2022 Maruti Suzuki XL6 facelift MPV will be launched on April 21, days after the carmaker drove in the facelift version of the Ertiga 7-seater MPV. (File photo)

Maruti Suzuki is all set to drive in the facelift version of the XL6 MPV to India on April 21. In its new generation, Maruti promises the six-seater premium MPV will offer more features and updates to attract buyers as well as help it step up its three-row MPV game amid arrivals of new rivals such as Kia Carens. XL6 was first launched in India three years ago as the premium version of the Ertiga. In its second generation, XL6 will be offered with a new engine, new set of gearbox besides several other changes, both inside and outside. Here is a quick look at what to expect from the 2022 Maruti Suzuki XL6 facelift MPV.

The new Maruti Suzuki XL6 will come with certain design updates on the outside as well as the interior. According to the teasers released by the carmaker, the XL6 will look sportier with a new design of chrome strip on the grille. The dual-tone alloy wheels, which are expected to be 16 inches in size, will also have a fresh design. The rest of the MPV, as shown in teasers, appears to remain similar to the outgoing model.

Maruti will continue to offer the new XL6 in two trims, which include the Zeta and Alpha. The 2022 XL6 will come with six exterior colour options like Arctic White, Splendid Silver, Grandeur Grey, Brave Khaki, Opulent Red and Celestial Blue. Maruti is also likely to offer dual-tone paint scheme for the Alpha trim.

Inside the cabin, Maruti will introduce new tech updates like a new infotainment system, 360 Camera among others. However, in terms of styling, the interior is likely to remain largely same, barring introduction of new upholstery and possibly ventilated front seats too.

2022 Maruti XL6 will boast of several new features, most of which were already introduced in the new Baleno a couple of months ago. These include a 360-degree camera setup, an all-new 7-inch touchscreen infotainment system which was also introduced in the new Ertiga, Android Auto and Apple CarPlay, wireless charging, SmartPlay Pro systems with Suzuki Connect telematics. As far as safety is concerned, Maruti is going to equip the new XL6 with four airbags as standard and may offer six of them for higher variants.

One of the major updates on the new XL6 MPV is under the hood. The second generation Maruti XL6 will come with the new 1.5-litre K15C series DualJet petrol engine. The engine will be mated to the usual five-speed gearbox and the newly-introduced six-speed automatic torque converter. The automatic variants of the XL6 will also come with paddle shifters, which were first introduced in the new generation Baleno in February. The engine is capable of churning out maximum output of 114 bhp and 137 Nm of peak torque.

With a host of new updates, Maruti hopes XL6 will offer more premium feel than before and match up with the likes of lower variants of the Kia Carens as well as have an edge over other rivals like Mahindra Marazzo. Maruti currently offers XL6 at a starting price of ₹10.14 lakh (ex-showroom) and goes up to ₹12.02 lakh (ex-showroom) for the top-spec variant. If Ertiga's pricing is any hint, expect Maruti to price the new XL6 as competitively.