2022 Maruti Suzuki Baleno facelift will renew its rivalry in a crowded premium hatchback segment against the likes of Tata Altroz, Hyundai i20 and Honda Jazz.
By : Sabyasachi Dasgupta
| Updated on: 23 Feb 2022, 01:54 PM 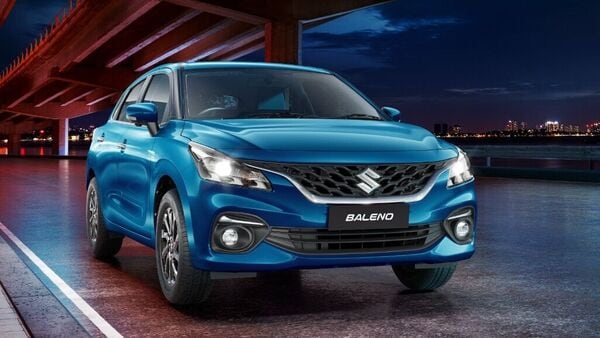 Maruti Suzuki has launched the 2022 Baleno facelift premium hatchback in India at a starting price of ₹6.35 lakh. The price of the new generation Baleno goes up to ₹9.49 lakh (ex-showroom). Maruti is also offering subscription model on the new Baleno with plans starting at ₹13,999 a month.

Bookings for the new generation Baleno, which now comes loaded with new-age technology, has already been opened at a price of ₹11,000. 2022 Baleno facelift will renew its rivalry against the likes of Tata Altroz, Hyundai i20 and Honda Jazz in the premium hatchback segment.

2022 Maruti Suzuki Baleno will be offered in four trims, which include Sigma, Delta, Zeta and Alpha as the top-spec trim. These will be separated into seven different variants based on the transmission units on offer.

Maruti continues to trust the same 1.2 litre DualJet petrol engine used in the outgoing model. The engine is capable of delivering 89 hp power and 113 Nm of peak torque. The engine will come mated to either a 5-speed manual or the newly-introduced AGS gearbox. It will also offer idle start/stop function.

Maruti continues to aim for improved mileage in its cars. After launching new generation Celerio last year, which claims to be the most fuel-efficient petrol car in the market, Maruti Suzuki has also bettered Baleno's fuel efficiency. Baleno will offer 22.3 kmpl mileage for the manual version and 22.9 kmpl for the automatic variants.

As far as the looks are concerned, the new generation Baleno retains the basic features of the older model. However, with certain tweaks, Maruti Suzuki has made the new generation model appear sharper. For instance, the grille has been redesigned and is now wider than before. It is flanked by a set of new LED projector headlamps, three-element DRLs. The bumper too has been redesigned while the bonnet is now much more flatter than before. 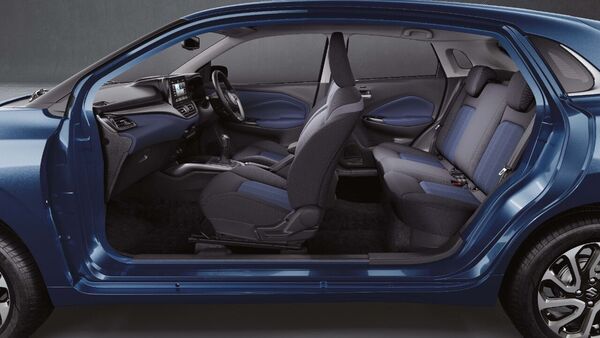 The interior of the 2022 Maruti Suzuki Baleno facelift hatchback

Maruti will be offering the Baleno with 6 colour choices, which would include NEXA Blue, Luxe Beige, Pearl Arctic White, Splendid Silver, Opulent Red and Grandeur Grey.

However, the biggest of the changes in the Baleno are on the inside. It gets a refreshed look with a new dual-tone interior, new upholstery and chrome inserts on the dashboard. In a much welcome move for Indian climate conditions, Maruti has added AC vents for rear passengers. It has also offered a fast charging port (AC type) for the rear passengers.

Among the tech features, 2022 Baleno will come with 360 View camera and a Head Up Display (HUD) screen, a first for any car from the brand in this segment. Maruti will also offer Surround Sense powered by ARKAMYS, claiming a premium acoustic sound experience for those inside the latest Baleno. Maruti will also offer new generation Suzuki Connect app, which will have more than 40 connectivity features along with Amazon Alexa voice commands too. It shows information like fuel gauge reading, distance to empty, odometre and other vital statistics. The app will also offer information regarding the overall health of the car, remotely turning on hazard lights as well as lock or unlock the car.