2022 Mahindra Scorpio-N facelift SUV to get new taillight. Here's how it looks

The Mahindra Scorpio-N facelift SUV will get a distinctly different set of taillights compared to the previous generation models.
By : HT Auto Desk
| Updated on: 15 Jun 2022, 01:11 PM 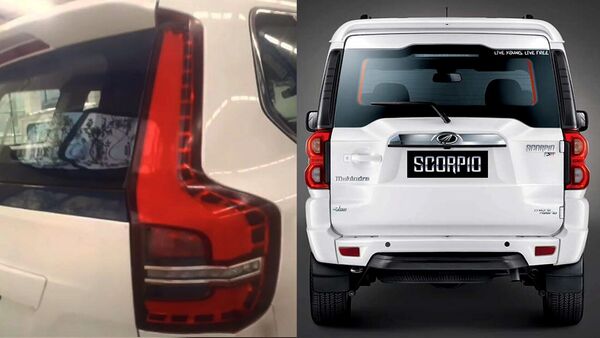 The Mahindra Scorpio-N facelift SUV will get a distinctly different set of taillights (left) compared to the previous generation models (right). (Image credit: Her Garage)

Mahindra and Mahindra is all set to debut the facelift model of the popular SUV Scorpio as Scorpio-N on June 27. The carmaker has already revealed several details about the 2022 Scorpio-N SUV including the exterior design changes and interior updates. A recently leaked image of the Scorpio facelift SUV has revealed more details about the upcoming model which was not shared by the carmaker so far. The 2022 Mahindra Scorpio-N facelift SUV was clicked at a showroom ahead of the launch, giving a clear look at the rear section for the first time.

The images shared on social media shows that the stance of the SUV from the rear has changed a lot compared to the existing models. For instance, the taillights will have a completely new design. The vertical shaped LED taillights have replaced the smaller units seen in previous models. The design looks somewhat closer to the taillight design seen on a Volvo car, or even the Maruti XL6. The design of the rear door has also changed a bit. It does not have the chrome bar under the rear windows. It also does not get the plastic claddings on either side of the window, which have now been replaced by the extended taillights.

Earlier, Mahindra has revealed that the new generation Scorpio-N SUV will get features like dual LED projector headlights, dynamic turn indicators and the new Mahindra logo. The Mahindra Scorpio-N, which will be offered in 4X4 variants too, will come with both petrol as well as diesel engine options. The engines will be mated to manual and automatic transmission choices.

Mahindra also revealed the interior of the new Scorpio-N SUV recently. Official images reveal that the Scorpio-N will get the premium 3D sound system by Sony that was first seen inside the XUV700. The main infotainment screen will also be powered by AdrenoX that is also offered in the XUV700. The SUV will get dual-tone black and brown theme on dashboard and the seats.