2021 Toyota Fortuner facelift to launch on this day in India

Toyota has readied two new Fortuner SUV models for India. Along with the standard Fortuner facelift, the company is planning to launch Fortuner Legender in India in January.
By : HT Auto Desk
| Updated on: 23 Dec 2020, 06:50 PM 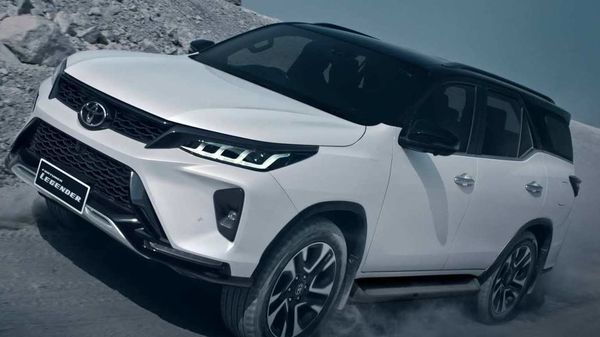 The facelifted Toyota Fortuner was globally revealed a few months back, along with the new model the company also has also revealed a higher-spec 'Legender' variant which was also spotted getting tested on the Indian roads a few days back. Now Toyota India has officially announced that it is launching a new model of the popular Fortuner SUV in India on January 6th. Goes without saying that it might be nothing other than the 2021 Fortuner facelift and the 2021 Fortuner Legender itself.

While the standard Fortuner variant has been updated from inside out, the higher-spec Legender is a sportier-looking variant with sharper-looking projector lamps, L-shaped DRLs, a smaller blacked-out mesh grille, and a more aggressive-looking front bumper. It also rolls on larger 20-inch dual-tone alloy wheels which contribute to its dominant appeal.

Under the hood, both the models will come equipped with the same 2.8-litre V-GD diesel engine which will push out 204 bhp of maximum power and 400 Nm of peak torque. In addition to that, there will also be 2.7-litre petrol unit which will be offered in the standard model. As far as transmission options go, while the Legender will be limited to a 6-speed automatic transmission, the standard model will also be offered with a 6-speed manual gearbox option. Also, a 4x4 system with a low-range transfer case is expected to be offered as a standard feature on the Legender trim.