Toyota’s e-Palette is a largely transparent, driverless oblong carriage on wheels that’s powered by a battery.The company has said it plans to make the e-Palette commercially viable within a few years.
By :
| Updated on: 22 Dec 2020, 03:58 PM 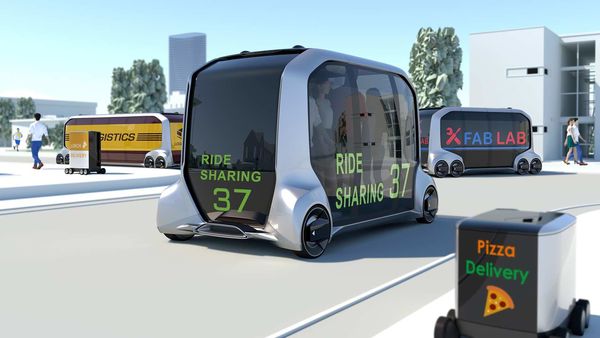 Toyota Motor Corp. is aiming to commercialize an autonomous shipping-container-like vehicle within a few year that it says could double as a mobile store or roving office.

Toyota’s e-Palette is a largely transparent, driverless oblong carriage on wheels that’s powered by a battery. It can accommodate up to 20 passengers, with seats that fold up and allow the space to be re-purposed.

The e-Palette began as a concept vehicle, announced at the 2018 Consumer Electronics Show by Toyota President Akio Toyoda, who said it is a symbol of how he is trying to transform the world’s second-largest automaker into a mobility company. On Tuesday, Toyota said it plans to make the e-Palette commercially viable within a few years.

The Japanese carmaker had sought to showcase the e-Palette at the 2020 Tokyo Summer Olympic games, where over a dozen of the vehicles, running on automated loops, were to be used to transport staff and athletes around the Olympic village.

“We received a lot of inquiries from people wondering about the fate of the e-Palettes after the Olympics were postponed," Toyota Connected Company President Keiji Yamamoto said on Tuesday.

“We’re receiving a lot of interest in the potential of e-Palette vehicles for delivery and shuttle services" and beyond that there’s “a tremendous amount of interest in actually using them as mobile stores and roving offices," he said.

(Also read | What is it about Toyota Tacoma pick-up truck that makes it red-hot in the US?)

Toyota has said in the past it will work with companies including Amazon.com Inc., Pizza Hut Inc. and Uber Technologies Inc. to launch the vehicles.

One of the first places the general public will be able to see the e-Palettes in action is in the 175-acre hydrogen-powered city that’s planned at the base of Mt. Fuji. The vehicles will transport the so-called Woven City’s initial 360 residents around, as well as provide mobile retail and delivery services.