2021 Tata Safari SUV to get captain seats in the middle row, reveals teaser

This is the first time that Tata Motors has revealed some interior detail about 2021 Safari SUV.Earlier, the carmaker had shared glimpses of the front face, rear quarter glass and tail lights of the upcoming SUV.
By : HT Auto Desk
| Updated on: 14 Jan 2021, 09:44 AM 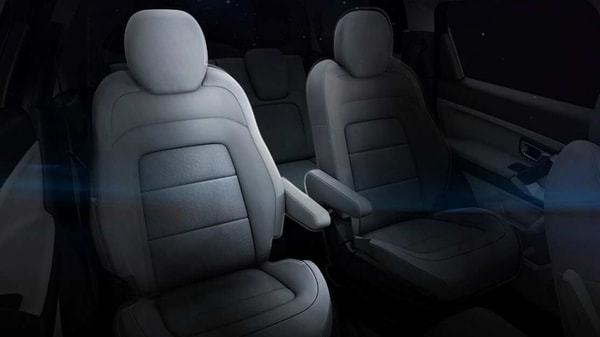 Tata Motors has revealed some of the interior details of the upcoming 2021 Safari SUV. The carmaker shared a teaser of the 6-seater version of Safari SUV days after it revealed key details about its looks from the outside.

In the latest teaser image, it is clear that the 6-seater Tata Safari units will have captain seats in the middle row. Both will have armrests and appear to be plush as far as the material is concerned. The side armrests on the doors also seem to have cupholders. However, it remains to be seen how much space is there for the third-row passengers which, going by the teaser image, does not look to be too spacious.

Earlier, shared how the front face, the rear quarter window on the D pillar and the tail lights of the new Safari will look like. The teasers have been shared as Tata Motors is getting ready to launch the new-generation Safari SUV this month.

Tata Motors resurrected the 'Safari' nameplate recently and is gearing up for the launch soon. Tata Motors recently announced that its Gravitas seven-seat SUV will be known as the new 'Safari'. The firm has also started manufacturing the upcoming seven-seat SUV which has now been spotted on the production line ahead of the official reveal. The model is set to break cover on January 26 and will be launched likely in February.

When launched, the new Tata Safari will get a long list of features, most likely based on the Harrier SUV. Some of the key features may include a signature-style oak brown dual-tone dashboard with an 8.8-inch floating infotainment system, a 7-inch instrument panel, JBL speakers, panoramic sunroof, and more such features.