Tata Motors recently announced that its Gravitas seven-seat SUV will be known as the new Safari.The model is set to break cover on January 26th and will be launched likely in February.
By : HT Auto Desk
| Updated on: 12 Jan 2021, 12:22 PM 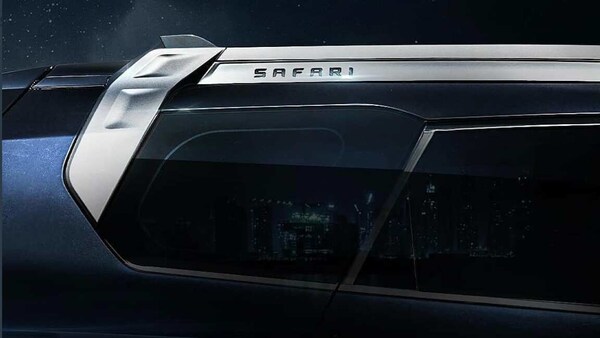 Ahead of its launch, likely to take place next month, Tata Motors has once again teased its upcoming new-generation Safari SUV. The new teaser comes days after the carmaker showed a glimpse of the new-look front face the iconic SUV will get in its new avatar.

The new teaser image, shared on social media by Tata Motors, shows the new quarter window at the rear. The older version of the SUV had a big rear quarter glass which reflected the seating layout as well as let more light inside the cabin. The new design, accentuated with chrome, has Safari embossed on it and is integrated with the roof rails of the new-generation SUV.

The teaser shared earlier threw light on the front grille and headlamps of the Safari 2021. As visible, the upcoming SUV will feature a slightly different grille while the projector headlights remain more or less the same.

Tata Motors recently announced that its Gravitas seven-seat SUV will be known as the new 'Safari'. The model is set to break cover on January 26th and will be launched likely in February.

The new Safari will come based on the OMEGARC (Optimal Modular Efficient Global Advanced Architecture) architecture which is found on the current Harrier SUV. For the uninitiated, the OMEGARC platform is derived from Land Rover's D8 platform. It will feature Tata's impact 2.0 design philosophy and will sit at the very top inside Tata's product lineup.

The Safari will come out to be slightly longer than the donor model and will offer a comparatively larger cabin space on the inside. It will get the signature-style oak brown dual-tone dashboard, three-spoke steering wheel, an 8.8-inch floating infotainment system with Android Auto & Apple CarPlay, voice recognition, a seven-inch instrument panel, and more. It might also be offered in a six-seater configuration with caption seats.