2021 Tata Safari's official bookings to start from tomorrow at ₹30,000

Tata Safari gets captain seats in the second row which is limited to its top-spec XZ trim.Expect the new Tata Safari to be priced somewhere in the bracket of ₹15 lakh to ₹20 lakh (ex-showroom).
By : HT Auto Desk
| Updated on: 03 Feb 2021, 15:53 PM 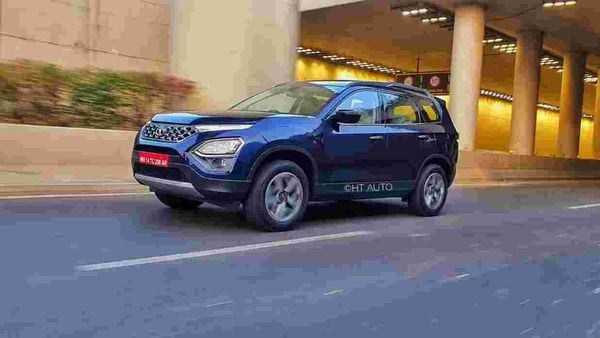 Tata Motors is gearing up to launch the new Safari 2021 in the Indian market soon. The official pre-bookings of the new SUV will start from Thursday (February 4) at a token amount of ₹30,000.

The new Safari is basically a longer version of the popular Tata Harrier SUV. It has been developed to accommodate 6 or 7 passengers at once (depending upon the configuration selected).

On the outside, it gets a very Harrier inspired exterior design and styling. While at the front it features the same tri-arrow pattern bold grille which is flanked by slim high-raised LED DRLs, and projector headlamps, the tail section has a completely new design. It also features a stepped roof for extended headroom for the last row passengers.

Inside, it comes with a very familiar dashboard and layout as found on the Harrier. There is an 8.8-inch infotainment system and driver screen borrowed from its technical cousin. It also benefits from a new colour treatment for the seats and Electric Parking Brake function which is first for Tata cars. In addition to this, it also gets the widest in segment panoramic sunroof. For the second row, a new boss mode function is available for extended space and comfort. It also gets captain seats in the second row which is only limited to the top-spec XZ trim.

Under the hood, there is a familiar 2.0-litre turbocharged diesel engine responsible for delivering 170 PS and 350 Nm of peak torque. The transmission options include a six-speed manual as well as a six-speed automatic setup.

As far as pricing goes, expect the new Tata Safari to be priced somewhere in the bracket of ₹15 lakh to ₹20 lakh (Ex-showroom). More details to follow in the later stage.