2021 Force Gurkha SUV teased again ahead of launch in September 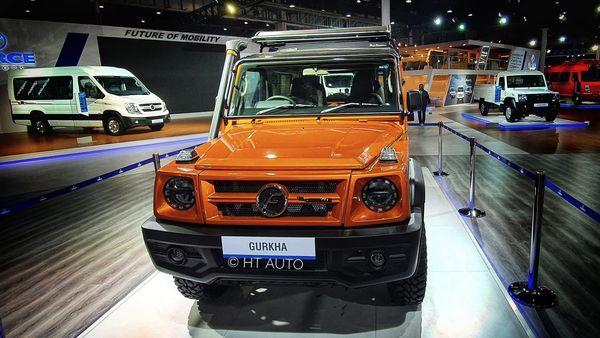 Force Gurkha SUV on display at the Auto Expo 2020. This was the pre-production version of the off-road SUV. However, Force Motors is expected to keep most of the design elements in the final production version. (Photo credit: Sabyasachi Dasgupta/HT Auto)

Force Motors has teased its upcoming 4X4 Gurkha SUV, which has undergone considerable facelift in terms of design and specifications, ahead of its official launch. 2021 Force Gurkha SUV is expected to launch in September, closer to the festive season.

According to the new teaser image released by the carmaker, 2021 Gurkha SUV will come with a snorkel and a functional roof carrier. Both these features were displayed in the pre-production Gurkha SUV showcased at the Auto Expo in February last year.

2021 Force Gurkha SUV will take on Mahindra Thar, which has had a relatively free run in the niche 4X4 segment since its launch last year. 2021 Gurkha SUV, which is expected to be launched at a price point ranging between ₹10 lakh and ₹12 lakh (ex-showroom), will be Mahindra Thar's only rival in the off-road segment.

2021 Force Gurkha is likely to be offered in three-door and five-door versions. It is expected to come in both four-seater and six-seater variants. The new Gurkha will stand apart from its predecessor in terms of design, which has been given a considerable facelift to look more like a contemporary lifestyle vehicle.

The design upgrades will include a new set of headlights with LED DRLs, a redesigned grille and front bumper, turn indicators placed over front fenders, redesigned taillights, newly designed wheels and a tailgate-mounted spare wheel.

On the inside, expect the new generation Force Gurkha to get an all-black theme with elements like hard plastic to make it more resistant to dirt and water. The SUV may get captain seats for the second row and side-facing jump seats at the rear. There will be a new touchscreen system, circular air vents with black surrounds and a three-spoke steering wheel.

Force Motors is likely to offer 2021 Gurkha with the 2.6-litre diesel engine, mated to a 5-speed gearbox. The engine has the capacity to produce maximum output of 89 bhp and 260 Nm of peak torque. Compared to Gurkha's engine power the new Mahindra Thar appears more powerful, at least on paper. With a 2.2-litre diesel engine under its hood, the 2020 Thar is capable of 130 hp of power and a peak torque of 300 Nm.