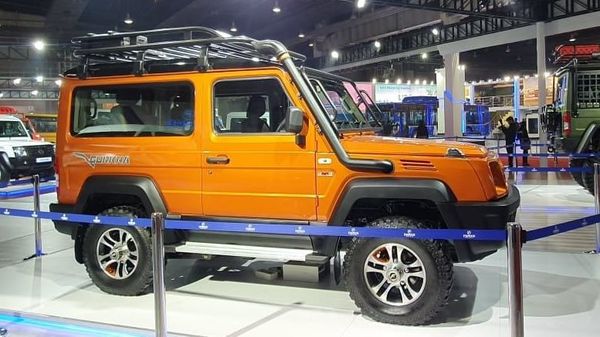 The new Force Gurkha SUV that was showcased by the automaker at the Auto Expo last year. (File photo)

2021 Force Gurkha SUV is all set to be unveiled next week. Force Motor has confirmed that it will officially take the covers off the Mahindra Thar rival on September 15.

Force Gurkha, which is essentially an off-road SUV, was first showcased in its new avatar during the Auto Expo held in Greater Noida last year. The 2021 Gurkha has not changed much from the pre-production model showcased at the event. It gets round-shaped LED headlights with LED DRLs, a redesigned grille and front bumper, turn indicators placed over front fenders, a long snorkel to enable smooth water-wading experience and a functional roof carrier.

Force Gurkha is also likely to continue get redesigned taillights, newly designed wheels and a tailgate-mounted spare wheel. Other highlights will include a functional roof carrier too.

The interior of the new generation Force Gurkha will be more premium than its predecessor. It is likely to be offered with an all-black interior theme. However, there is likely to be a lot of hard plastics all around to make it more dust and water resistant for off-roading. Gurkha is also likely to get a new touchscreen infotainment system and a three-spoke steering wheel. It is also likely to get moulded floor mats for low NVH levels inside the car.

Force Motor may offer 2021 Gurkha in two body shapes - two-door and five-door. It may also get captain seats for the second row and side-facing jump seats at the rear.

Under the hood, expect the new Gurkha to come with a 2.6-litre diesel engine churning out 89 bhp and 260 Nm of peak torque. For transmission, the SUV could use a 5-speed gearbox.

2021 Force Gurkha will take on its key rival Mahindra Thar SUV, which was launched on October 2 last year. Gurkha will not have any other direct rivals in this niche segment unless any other models, like Maruti Suzuki Jimny, is launched in India. The price of the new Gurkha is likely to range between ₹10 lakh and ₹12 lakh (ex-showroom).