Yamaha has opted for a full-fledged supersport design language on the upcoming R7.The striking exterior styling of the YZF-R7 reminds of the existing R-series bikes from Yamaha.
By : HT Auto Desk
| Written By : Prashant Singh
| Updated on: 18 May 2021, 03:11 PM 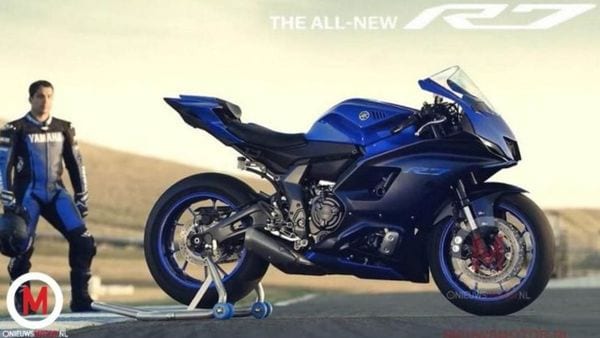 The YZF-R7 will be made available in two colour schemes - Raven Black and Team Yamaha Blue. Image Credits: nieuwsmotor.nl

Yamaha is gearing up for the reveal of the new YZF-R7 supersport motorcycle. Now images of the upcoming bike have been leaked ahead of the global debut which is slated for later today (May 18).

The leaked images show that the company has opted for a full-fledged supersport design language for the upcoming R7 and it does share a fair bit of styling elements with existing YZF-R models.

At the front, it gets a single-pod headlight which appears to be residing inside a large ram-air intake. The single-pod headlight is flanked by twin-beam LED DRLs that look sharp and aggressive. The entire body of the new R7 has been crafted in a way that its sport large openings in the fairing to dissipate hot air and keep the powertrain cool. The rear section of the bike is also very sharply raked, as seen on other YZF-R models

As per the leaked images, the YZF-R7 will be made available in two colour schemes - Raven Black and Team Yamaha Blue. The same was also suggested as per information revealed in the CARB document earlier in 2021.

While the official technical specifications are not available at the moment, the new R7 is believed to be powered by the 689cc parallel-twin engine that is also found in the 2021 MT-07. The overall output from this engine may also remain unchanged at 72.4hp at 8,750rpm and 67Nm at 6,500rpm. It will be a direct rival to the likes of the upcoming Kawasaki Ninja 700. Image Credits: nieuwsmotor.nl

The leaked images suggest that the bike gets a USD fork at the place of the telescopic unit found on the MT-07. Whether or not it offers adjustability, remains to be seen. Details on the frame and more specifications will be rolled out soon.