Yamaha Neo's electric scooter comes with a hub-mounted motor which offers a top speed suitable for urban commuting.
By : HT Auto Desk
| Updated on: 05 Mar 2022, 10:18 AM 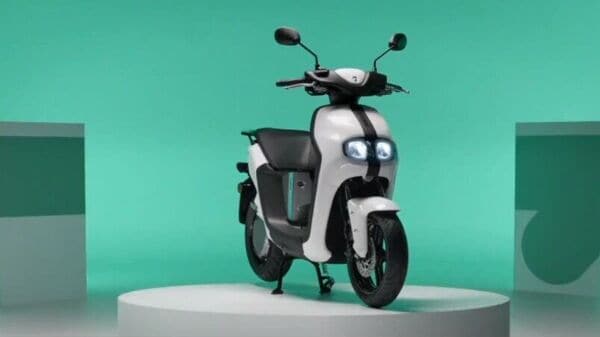 Neo's electric scooter by Yamaha is essentially an equivalent of a 50cc petrol-powered scooter.

Yamaha Neo's electric scooter has been revealed for the international market. This scooter comes out as an initial installment in the company's long term plan of launching a range battery-powered two-wheelers. It will be Yamaha's one of the first electric scooters to hit the production line and then later on dealerships in select countries.

Neo's electric scooter by Yamaha is essentially an equivalent of a 50cc petrol-powered scooter which also offers quite a similar performance. It comes based on the E02 concept which was previously showcased by Yamaha at the 2019 Tokyo Motor Show. The company also sells an ICE-powered Neo's 50cc scooter in the select international markets, and Neo's EV is basically an EV iteration in the same model lineup.

It comes with a hub-mounted electric motor which offers a top speed suitable for urban commuting. It also gets swappable lithium-ion battery pack. The company has also signed a deal with several other two-wheeler giants such as KTM, Piaggio and Honda, and it might also be working on setting up its own battery-swapping infrastructure, but the details aren't confirmed at the moment.

Neo's electric scooter is slated to reach the dealerships in select countries this summer. Although, its chances of getting launched in the Indian market are slim.

Meanwhile, the company has also showcased its E01 battery-powered scooter concept. Unlike the Neo's, the E01 will have a performance on par with its 125cc ICE counterparts. The production-spec version of the same is likely to break cover by late-2024.