The 2021 Yamaha FZ-X is likely to launch in India this summer.Its dimensions are slightly different from the existing FZ FI motorcycle.
By : HT Auto Desk
| Written By : Prashant Singh
| Updated on: 29 Apr 2021, 03:56 PM 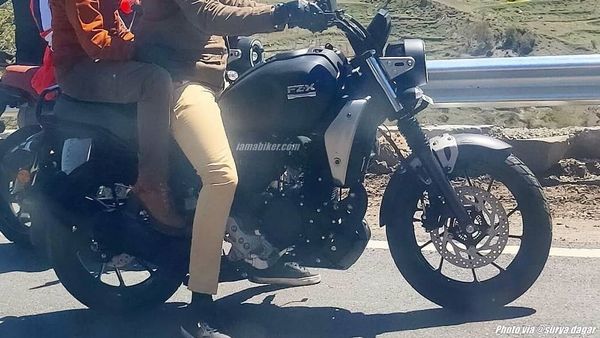 The 2021 Yamaha FZ-X is likely to launch in India this summer. Image Credits: Surya Dagar

Yamaha Motor India is gearing up to introduce a new neo-retro motorcycle in the form of the FZ-X small-displacement bike. Official tech-specs of the bike were leaked in a document in the past, it has now been spotted amidst a TVC shoot recently.

The latest spy image (above) gives a clear view of the exterior design of the motorcycle. At the front, it gets a circular headlamp with LED DRLs. There is a high-staged fuel tank sporting the brand logo on either side. The fuel tank gels in with a single-seat layout that comes raised from the back to give the bike an aggressive appeal. The seat then culminates with a plain grab handle. On the other hand, the rear section view isn't visible in the image. While the details aren't confirmed at the moment, expect the bike to sport a fully digital instrument panel from the FZ Fi V3.0.

The leaked document suggests that the bike will feature the 149 cc FZS-FI platform and not the 250cc. It is the same engine that is known to pump out 12.4 bhp of maximum power at 7,250 rpm.

In terms of dimensions, it will have 2,020mm of length, 785mm of width and 1,115mm of height. For the record, the FZS-FI measures 1,990mm x 780mm x 1,080mm in terms of length, width and height figures. Goes without saying, the dimensions are tweaked thanks to the unique bodywork on the motorcycle. The wheelbase, on the other hand, remains identical at 1,330mm.

It is expected to be launched towards mid-2021. More details are likely to roll out in the days to come.