1290 Super Adventure will get a radar-based cruise control system.It is will continue forward with the current R and S iterations.
By : HT Auto Desk
| Updated on: 14 Jan 2021, 16:51 PM

The Austrian motorcycle maker, KTM has shared a teaser for an upcoming product reveal on January 26. The firm has posted no other detail apart from the tagline “The World Gets Smaller" which only hints that a new adventure motorcycle might be in the pipeline. For the record, even Triumph Motorcycles will debut its Speed Triple 1200 RS on the same day (more details here).

KTM will most likely unveil the new 1290 Super Adventure motorcycle which is due for launch. It is will continue forward with the current R and S iterations and will house an updated BS 6-compliant engine along with a completely new exhaust system. The updated powertrain will continue to deliver the same 160hp of power, and slightly lower torque at 138 Nm. The transmission will remain the same 6-speed unit. The firm has also redesigned the airbox for easy access to the air filter element. 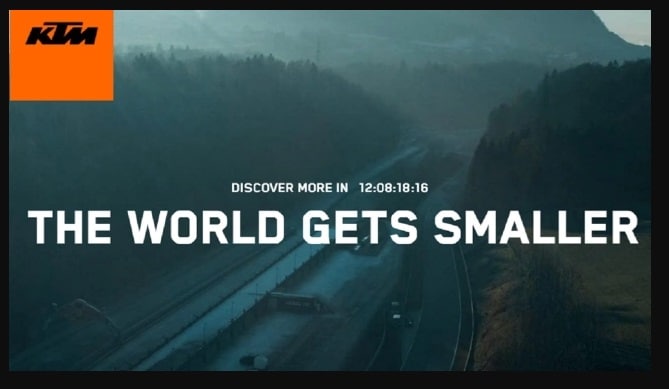 The teaser tagline suggests that the upcoming bike will be nothing but new 1290 Super Adventure,

A previous leak also suggested that the bike will now feature a radar-based adaptive cruise control system. Currently, the feature is available in its rival Ducati Multistrada V4.

The new 1290 Super Adventure features a chrome-molybdenum steel trellis frame with laser-cut tubes and forged elements. Other structural tweaks include a lengthened swingarm, remodeled steering head, and lowered seat. While the R-spec model gets 0.4 inches lower seat, the S features a seat that is adjustable from 33.4 to 34.2 inches.

The equipment and cycleparts on the bike such as brakes and suspension will be carried over from the outgoing model. Also, the electronics package will see no major tweaks either, of course, apart from the latest radar-based adaptive cruise control setup.