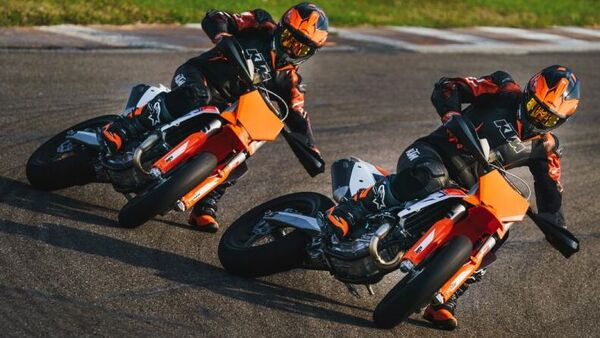 The 2023 KTM 450 SMR has already gone on sale in the international market.

KTM has revealed the new 2023 450 SMR Supermoto bike with some heavy updates to the mechanicals as well as the feature list. The bike has already gone on sale in the international market. The motorcycle's engine has been updated for 2023. The unit now weighs just 27 kg and churns out 63 bhp of maximum power. The company claims that the engine has been redesigned with mass centralisation in mind. In order to attain a better (mass centralised) geometry, the motor has been tilted backward. Its sprocket has been dropped by 3mm and there is new cylinder internals, along with a reworked crankshaft.

(Also Read: KTM 490 range to see the light of day later this year)

Keihin Engine Management System has been introduced on the bike that monitors traction control, launch control, as well as two engine maps. The transmission has been sourced from Pankl Racing which is a five-speed gearbox. Shifting between the gears is also clutchless, with a newly introduced quickshifter that is switchable using a dedicated button on the handlebar.

The braking is taken care of by Breambo four-piston calliper system at the front and a 220mm rear brake disc at the rear. The company says this system “will let riders drift all the way till they shift".  For the front suspension duties, the bike uses 48mm AER forks with split-damping. The company adds that the suspension can be adjusted on the go and is ‘tool-less’. There is a WP XACT shock at the rear which is shorter and lighter, but gets the same amount of travel as per KTM.

The front and rear are brought together by a “hydro-formed, laser-cut and robot-welded frame," as per the company. Both the longitudinal torsional flex has been adjusted keeping the previous year 450 SMR models in mind to improve feedback.