Navdeep Saini was spotted in a video with a Harley-Davidson motorcycle that became viral on Twitter.
By : HT Auto Desk
| Updated on: 31 May 2021, 12:08 PM 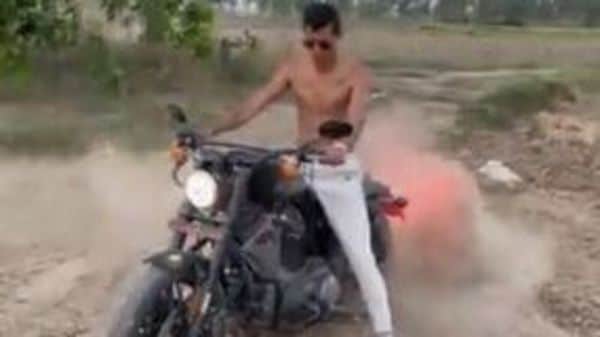 Indian national team fast bowler Navdeep Saini has made headlines again, but this time not for cricket but for his stunt with a Harley-Davidson motorcycle. The 28-year old pacer has uploaded a video on his Twitter account, where he is seen showing off his Harley-Davidson, where he wrote, "Accompany me on my bike to feel the fear," and tagged the motorcycle brand's official Twitter handle.

Accompany me on my bike to feel the fear @harleydavidson pic.twitter.com/iosa8wS2ya

The video has gone viral within a short span and received more than 1,400 retweets and over 3.60 lakh views. Several fans commented on the video. Some pointed out the dust being puffed out from the back of the motorcycle, while some reacted to the video negatively as well.

Navdeep Saini is known for his blistering fast bowling. He was a part of the Indian cricket team that won the recent historic test series against Australia. He was appreciated by the cricket world for his courage, as Saini continued to bowl at the Gabba despite getting injured on the first day of the fourth Test match between India and Australia in Brisbane, in January.

Mahindra group chairman Anand Mahindra was so impressed by Navdeep Saini's performance in the India-Australia test series, that he decided to present the all-new Mahindra Thar SUV to Saini along with five other players.