Since their launch, Husqvarna's 250 twins have already received a price revision and currently cost about 1.84 lakh (ex-showroom).Svartpilen translates to black arrow in Swedish, while the Vitpilen is called white arrow.
By : Prashant Singh
| Updated on: 29 Sep 2020, 03:45 PM 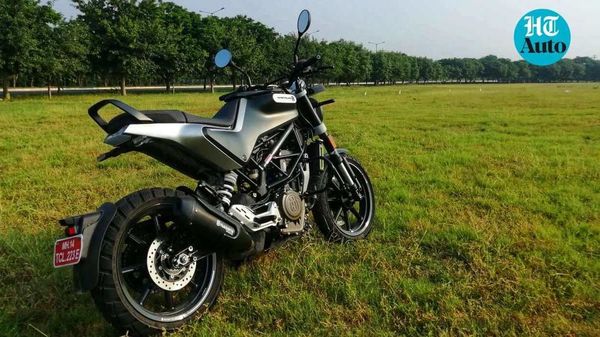 The KTM owned Swedish motorcycle making brand – Husqvarna - announced its India entry with the Svartpilen 250 and Vitpilen 250. And the bikes created quite a buzz from the moment they were unveiled at the IBW 2019.

The Svartpilen translates to 'black arrow' in Swedish, while the Vitpilen is called 'white arrow'. It is not hard to find out why the company has gone with these names seeing the sharp and minimalistic appeal these Husqies carry.

Just a brief glimpse and the Husqies pull your attention instantly. And it’s not hard to figure out that they carry a yet another exemplary design produced by 'Kiska' that has been churning out razor sharp KTMs all these years. The Husqvarna 250 Twins have been designed by Kiska studio which is owned by KTM. Bike: Vitpilen 250. Image: Prashant Singh

A large round headlamp takes centre stage on both the bikes. It is an LED unit and comes with integrated DRLs as well. The seat flows in from the tank seamlessly and the pillion seat is small and also gets a grab rail. While the Vitpilen gets a single 'connected' seat, the Svartpilen gets a split seat setup. There isn't any major difference between both the seats as both are equally comfortable.

The Svartpilen 250 comes out as an urban scrambler, and hence has been given a raised single-piece handlebar, mid-set foot pegs, a luggage rack bolted on the fuel tank and dual-purpose tyres with eight-spoke alloys. On the other hand, the Vitpilen gets very aggressively set low-down clip-ons, rear-set footpegs and a cleaner looking tank. 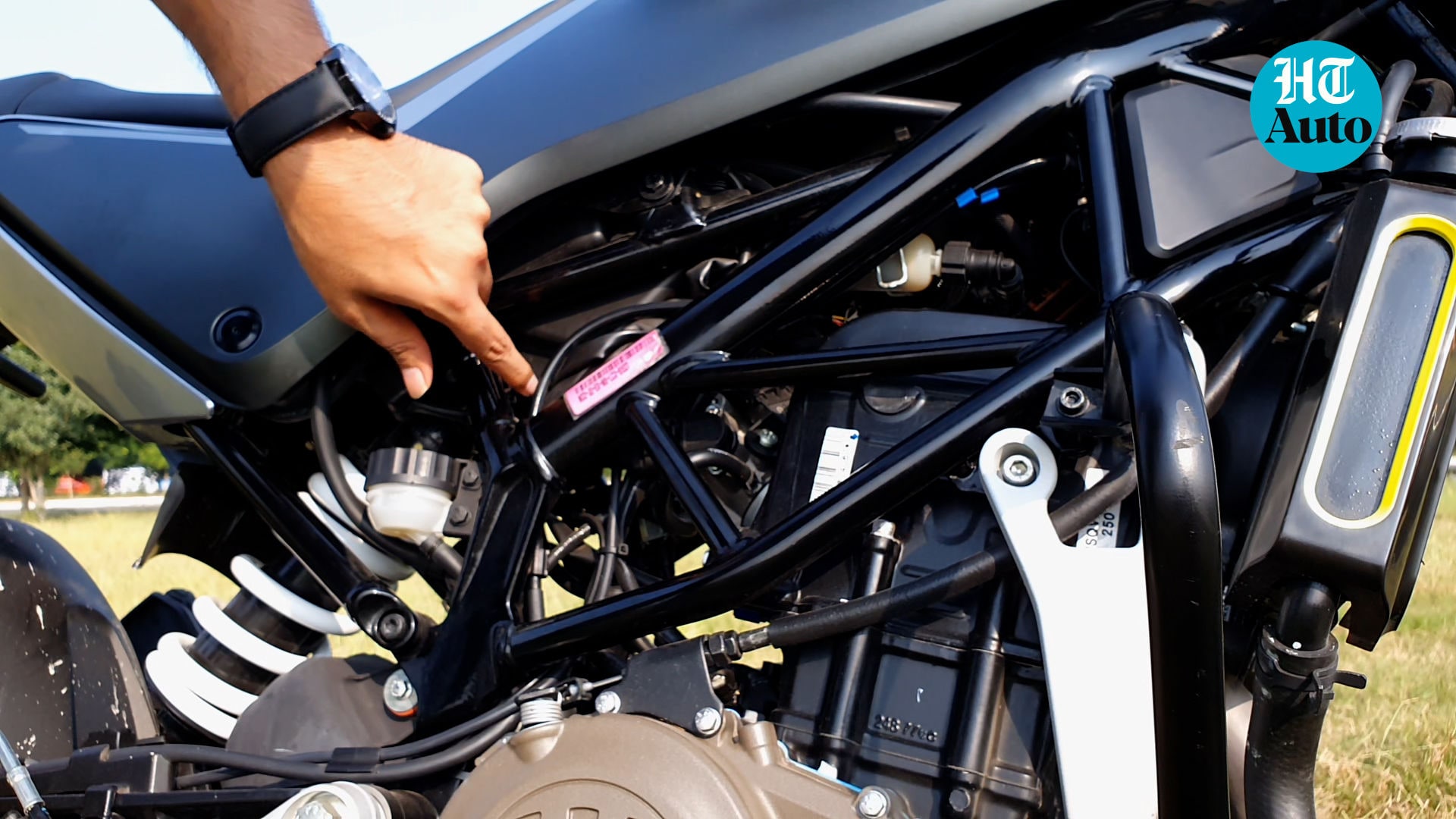 Bits like weld marks on the additional stay at the handle bar, quality of bolts, and the wires' mesh clearly visible under the frame leaves a little to be desired. Bike: Svartpilen 250. Image: Sabyasachi Dasgupta

While the overall design has been carried out rather impressively, bits like weld marks on the additional stay at the handle bar, quality of bolts, and the wires' mesh clearly visible under the frame leaves a little to be desired. Also the fact that the overall built quality is nothing exceptional is another chink in the armour.

One of the main highlights of the new Husqies is the small full digital instrument console which is common on both the bikes. Its circular shape gels well with the overall neo-retro feel of the bikes and serves the basic purpose. For example, it has all the information as it shows current speed, time, the gear you are slotted in, distance to empty and there is also an rpm meter over the upper side with the markings done outside the panel which also has several other indicators. The meter console is accompanied by two buttons over the side which have been programmed as the regular set and browse keys. They are slightly stiffer in action and you need a rather heavy hand to operate these buttons. 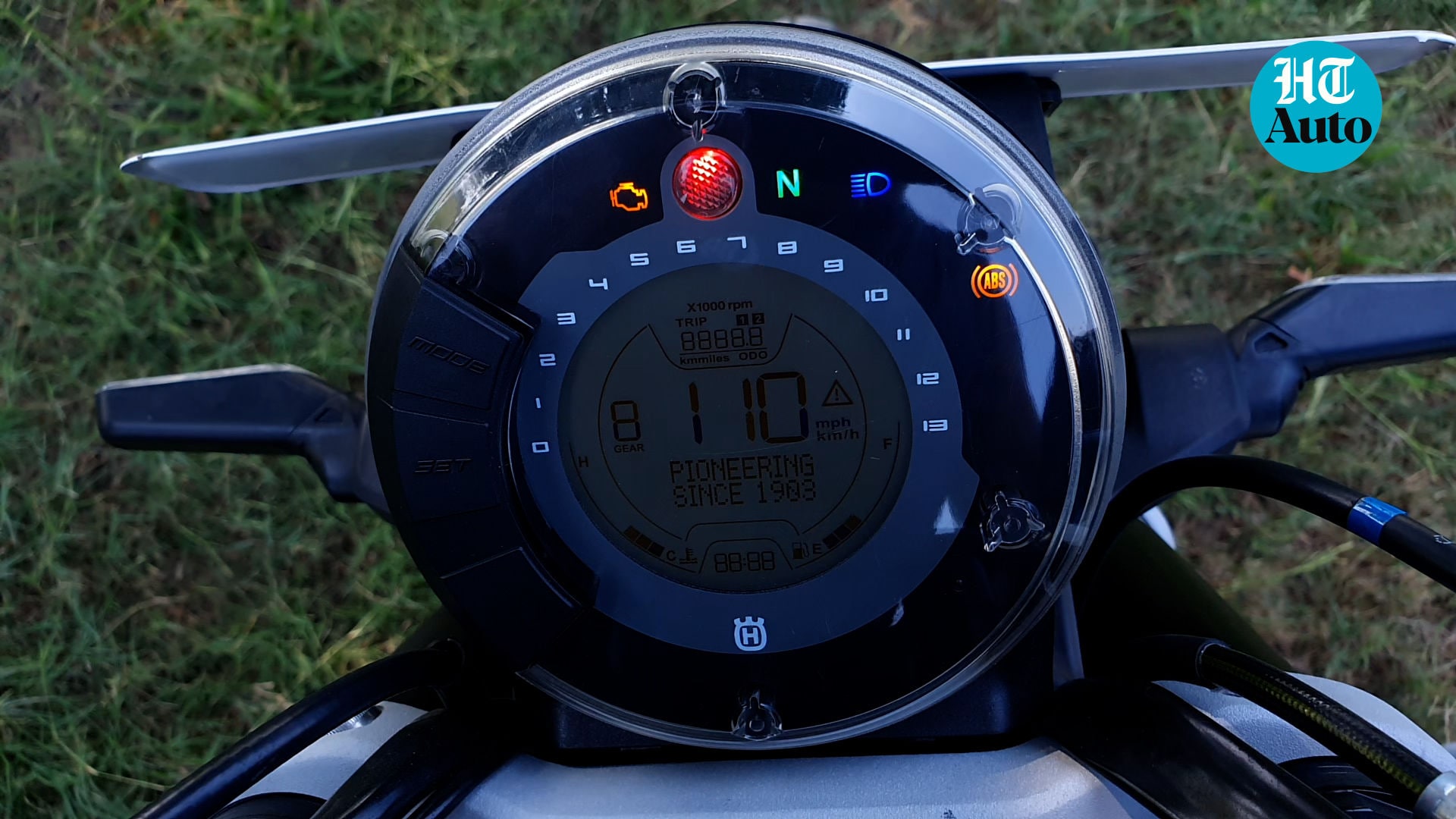 One of the main highlights of the new Husqies is the small full digital instrument console which is common on both the bikes. Bike: Svartpilen 250. Image: Sabyasachi Dasgupta

It is no news that the Husqvarna’s 250 twins are based on the KTM 250 Duke. So basically the Husqies get the same 250 cc single-cylinder liquid-cooled engine which isn’t exactly new. It delivers 30hp/24Nm. And the gearbox is also the same 6-speed unit.

You must be living under a rock to not know how quick revving and fun this engine is, but over the years, it has sort of become more “well behaved". It only comes alive when you reach the mid-range and there’s a meaty top end as well thanks to its higher compression ratio of 12.5. Overall it is a fun, smooth, and responsive engine for a quarter-liter daily riding motorcycle.

The engine keeps pulling until it hits the red line and there is minimal or no vibration even when you keep it at absolute boil. While originally it was known for its aggressive initial and mid-range pickup, it feels slightly relaxed and more manageable especially when riding on the daily city roads. While the six-speed transmission remains slick and responsive as always. You can comfortably cruise at around 90-95 kmph speed all day long, but it starts to lose steam right after you hit triple digit speeds. 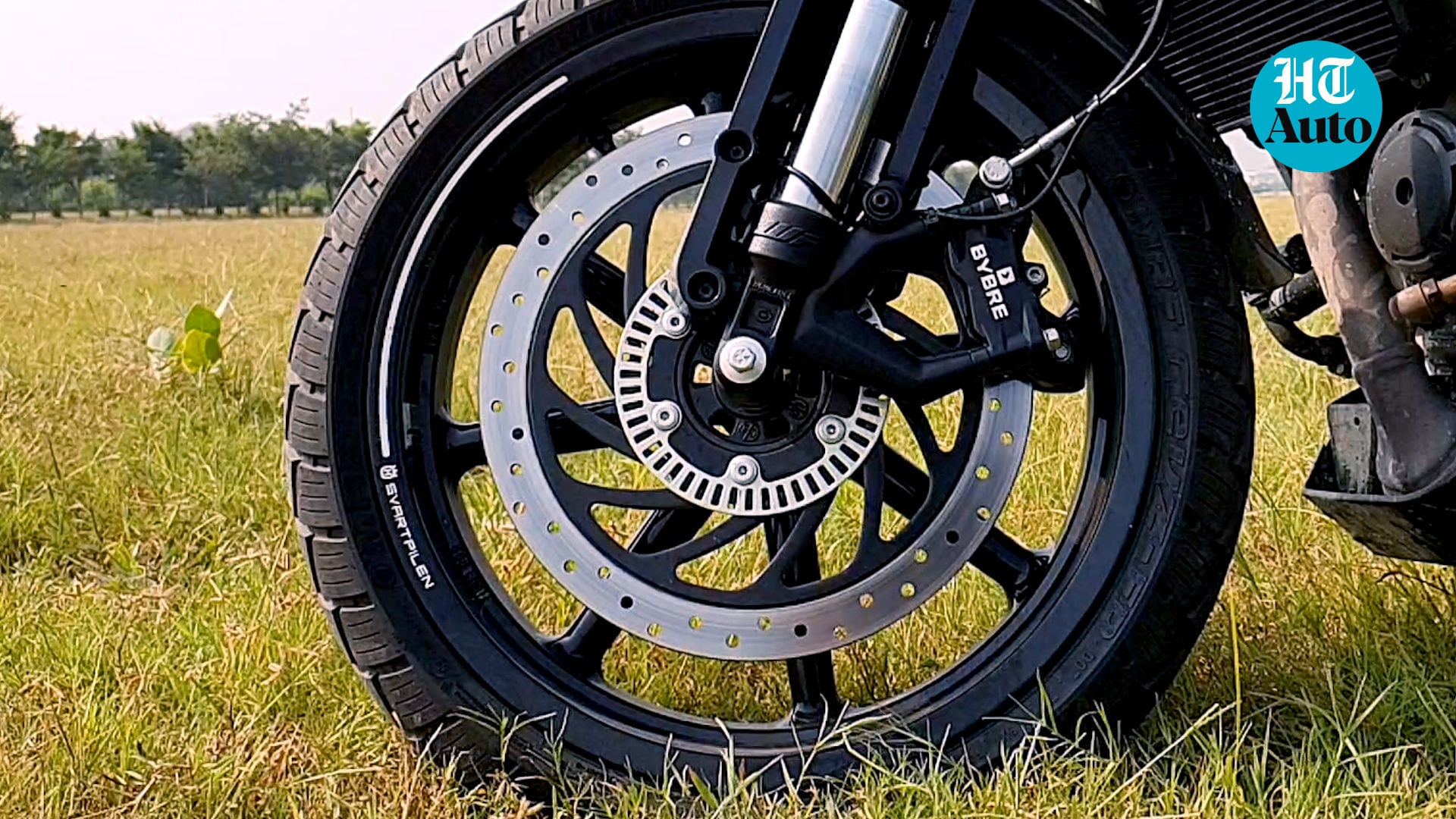 Just a tap on the brakes and the 250 Twins stop instantly without any drama. Bike: Svartpilen 250. Image: Sabyasachi Dasgupta

Husqvarna, as a brand is known to make fun bikes and the 250 Twins are no exception. The way Husqvarna setup their bikes and tune the suspension has a big role in making its bikes exciting. The Husqvarna 250 twins get WP (Apex) USD front fork which is complemented by a single mono shock at the rear. This is not taken directly from the 250 Duke since this is a more premium setup in comparison. This makes the bikes simply glide over everything that the regular city roads can throw at the pair.

The setup is slightly on the stiffer side, but thanks to the overall tuning, it soaks up all the undulations without letting the rider know. And on the other hand, throw a corner and you will be all smiles as the chassis handles the weight transitions well and allows you to really hook around a tight corner with confidence. 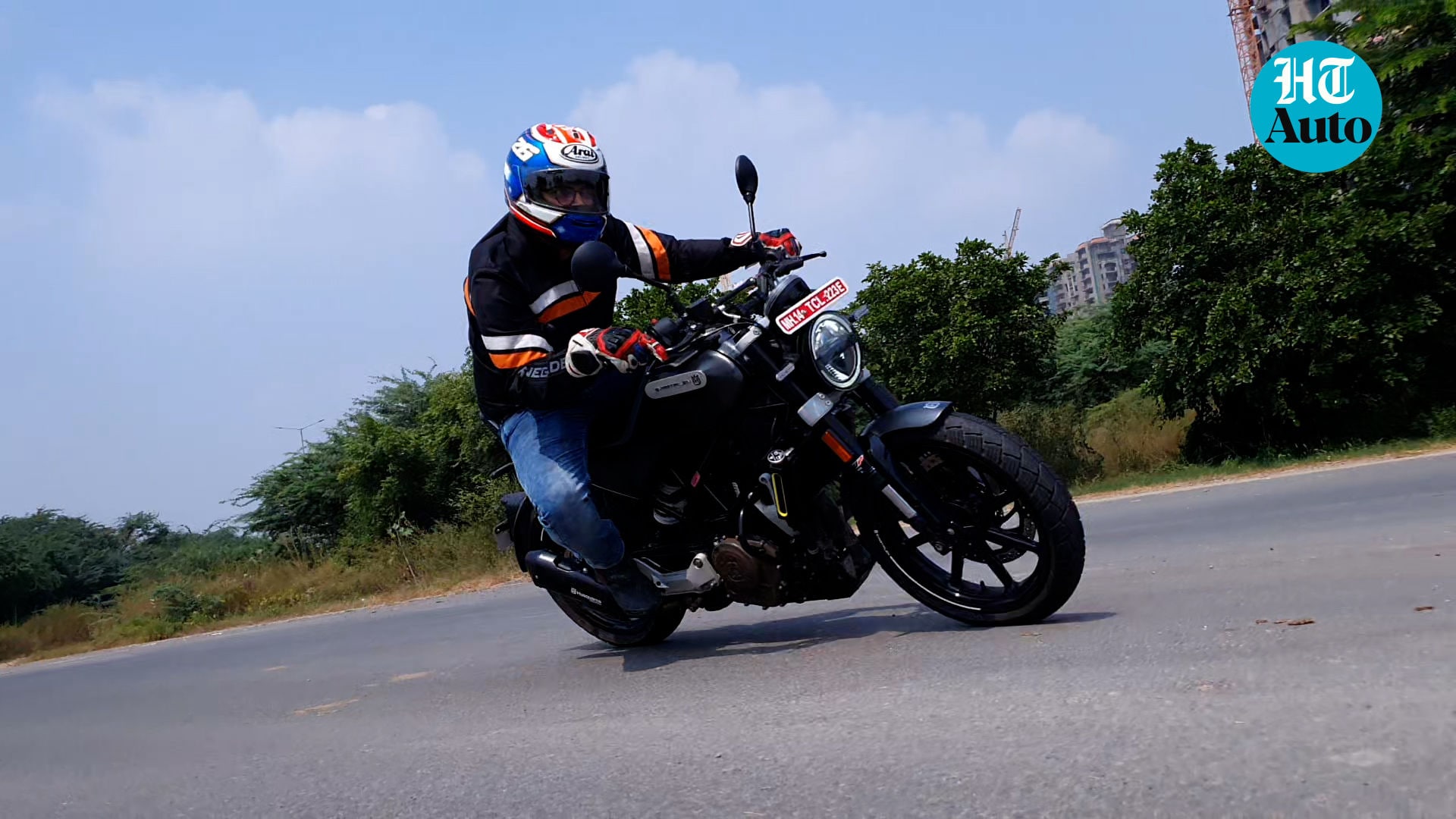 While both the bikes ride and perform like an exact replica, they are world apart when it comes to the rider's comfort. The Vitpilen being a sporty cafe-racer bike offers a very aggressive leaned-forward riding position. It forces you to sit like you are on a race bike holding the low-slung bars tightly. Anything more than an average 15-20 minutes ride and your wrists get numb which isn't unusual for a cafe racer.

On the other hand, hop on the Svartpilen and the overall comfort on this one is rather 'impressive'. You sit fairly upright, and the long and extended handlebar gives you enough grip on the bike. The mid-set foot pegs keep your legs straight and in a balanced position. The only niggle is that there is limited room available for you to move to the front/backward on the seat due to its limited length. And the issue is common on both the offerings. Also, not to forget the seat height of 835 mm (common) may not be very forgiving for shorter rider.

Leaving all that aside, the lightweight and sharper riding dynamics of the Husqvarna 250 Twins inspire confidence, irrespective of your riding skills. 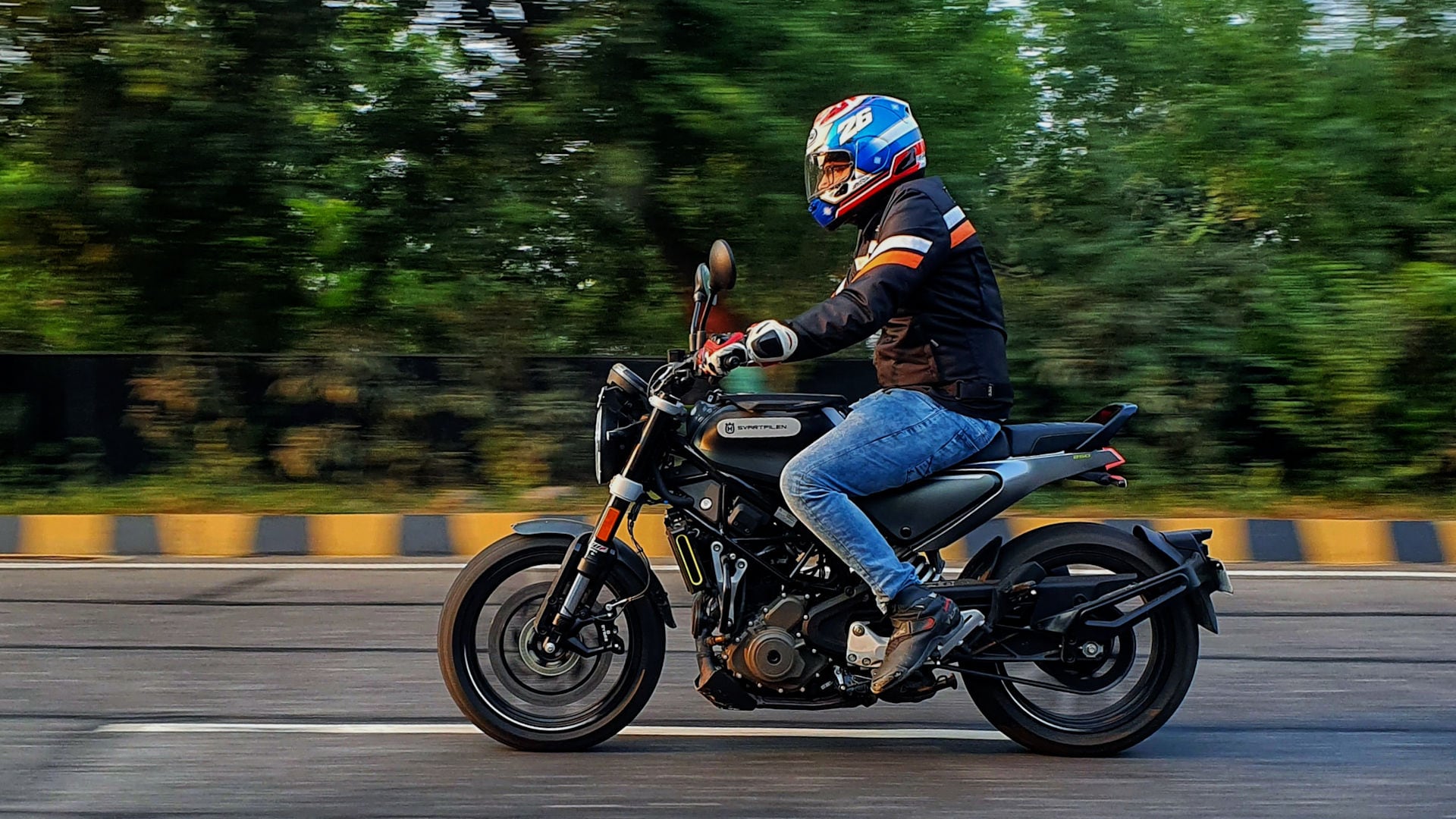 You sit fairly upright on the Svartpilen 250 and the long and extended handlebar provides enough grip on the bike.

Since launch, the 250 twins have already received a price revision and currently cost about 1.84 lakh (ex-showroom). Now if you do some research you’ll find that the Husqies are basically priced slightly higher than the corresponding KTMs in the international markets, but since Husqvarna is a fairly new brand in India, here the pricing currently has been kept quite aggressive.

The Husqvarna Svartpilen 250 is not something you’d want to take on tours, or go off the roads even though it has a scrambler stance, but it is basically made for daily urban riding and nothing more and it does that well. It appeals to a wider set of audience thanks to its comfort oriented ride and friendly setup over the Vitpilen 250 which is made for rather 'hardcore riders'. The Svartpilen 250 appeals to a wider set of audience thanks to its comfort oriented ride and friendly setup over the Vitpilen 250. Bike: Svartpilen 250. Image: Sabyasachi Dasgupta

So if you are willing to spend as much as nearly ₹2 lakh on a motorcycle, then the Husqvarna's 250 twins will bring forward a proposition which is not only unique with their oddball design but also 'fun' thanks to what they pack on the inside.