Honda Scoopy nameplate registered in India. All you need to know

Honda Scoopy is sold internationally as a family oriented, featured kitted scooter.
By : HT Auto Desk
| Updated on: 06 Apr 2022, 07:32 AM 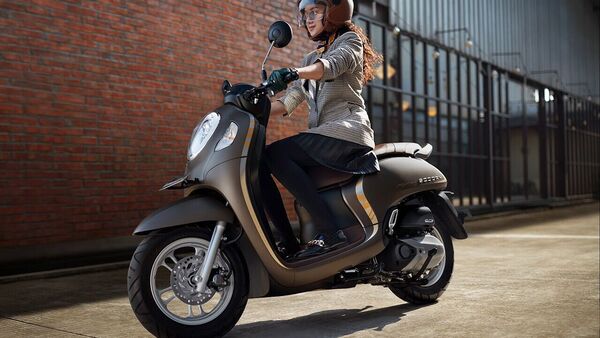 Honda Scoopy is sold in the international markets with a 109.5cc engine rated to produce 9hp of power and 9.5Nm of torque.

Honda Motorcycle and Scooter India has filed for a patent for the name of Scoopy in the Indian market, as per details revealed through the official transport department website. The scooter is sold internationally and is a staple of Honda’s Asian lineup. Chances are that the same might also be introduced in the Indian market, but nothing is officially disclosed as of yet.

On the outside, the Scoopy scooter gets quite a funky design profile featuring a large apron mounted oval LED headlamp. This unit is flanked with indicators on either side and the overall body of the scooter features fluidic body panels along with a long and spacious seat for a typical family scooter. Towards the rear end sits a round brake lamp flanked by turn indicators.

Some of the key features on the scooter include a large semi-digital instrument cluster, projector headlamp, USB charger, and a Smart Key System. It’s smart key system includes call back, keyless ignition, and anti-theft functionality. In addition that, the scooter also gets a large under-seat storage with a capacity of upto 15.4 litres.

The scooter is sold in the international markets with a 109.5cc engine rated to produce 9hp of power and 9.5Nm of torque. It comes mated to a CVT gearbox.

The suspension kit on the scooter include a telescopic front fork and a monoshock at the rear. It rides on 12-inch alloy wheels with a disc brake at the front, while for rear it uses a drum unit. It also gets Honda's Combi braking system for added safety.

Though there is no official confirmation, but if Scoopy is launched in India, it will rival the likes of Yamaha Fascino. It has been priced at Rp. 20,475,000 (equivalent to ₹1.08 lakh) in Indonesia.