HMSI aims to expand its premium bike portfolio along with the dedicated retail network.HMSI is focusing on the mid-size segment for the expansion of the premium motorcycle segment.
By : HT Auto Desk
| Updated on: 28 Feb 2021, 01:59 PM 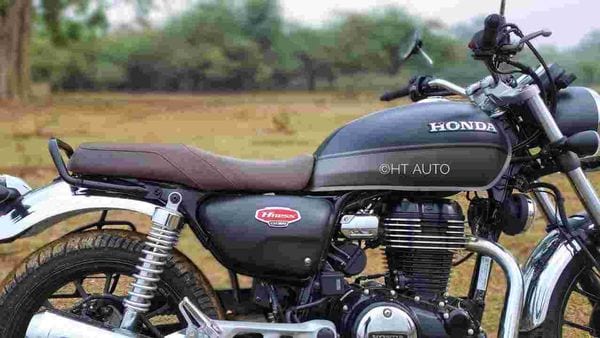 With the new CB350 Honda has decided to stick to its philosophy of ‘keeping it simple’. (HT Auto/Sabyasachi Dasgupta)

Honda Motorcycle & Scooter India (HMSI) has introduced its mid-size premium bike H'ness CB350 in the Indian market aiming to grab a chunk of the high demand segment in the biggest two-wheeler market in the world. Priced between ₹1.86 lakh and ₹1.92 lakh (ex-showroom), the premium bike has sold 3,543 units in January 2021.

Now, after grabbing eyeballs in the Indian market, HMSI is exploring the possibility of exporting H'ness CB350 to various markets across the world, claimed a senior company official of the company.

The Honda H'ness CB350 comes with more than 90% localisation from its Manesar (Haryana) manufacturing facility. The bike was launched in October 2020 and has already crossed the 10,000 unit sales mark in February 2021 in the Indian market.

HMSI Director (Sales and Marketing) Yadvinder Singh Guleria said that as the bike meets European regulations, it could be exported to many countries. He also said that HMSI is in discussion with its headquarters regarding the export of the bike and there is interest from other Honda companies across the globe.

Terming it as Made-in-India for the world, Guleria said that HMSI is currently focusing on catering to the bookings which have already come in for the bike in the domestic market.

"We are working at the backend now to minimise this waiting period. But for sure this is one model which is Made in India for the world. There is big potential. We are waiting and once we get a green signal from headquarters in Japan, we can start the exports. Potential does exist and we are quite hopeful," Guleria said.

"Our study says there is a big potential that exists for us in this segment. It also says that we can have a fair business volume which could make our exclusive BigWing network to be viable and sustainable," Guleria added.

HMSI plans to have around 50 such dealerships across big cities and smaller towns by the end of 2021. Talking about the future products, Guleria said that HMSI had been carefully watching and studying the mid-sized bike segment for a couple of years and sees a large potential in the years to come in terms of volumes.

"We could also identify that there were some gap areas in terms of customer expectations which we can include in the new product development and that is how we went ahead with H'ness CB350 and it has received great response in the market," Guleria said.

The CB 350 RS is built on the same platform as H'ness CB350 but with altogether different characteristics and styling. HMSI hopes to bring in a separate set of customers with the new product especially youngsters and people looking for something which can meet their lifestyle and weekend drives in the urban settings, said Guleria. He also said that the initial response for the bike has been on target, but the real picture would be clear only after the product delivery begins in early March 2021.