Launch of the new Husqvarna Scrambler is likely to take place next year. It will also be accompanied by its cafe-racer derivative - Vitpilen.
By : HT Auto Desk
| Updated on: 25 Feb 2022, 12:15 PM 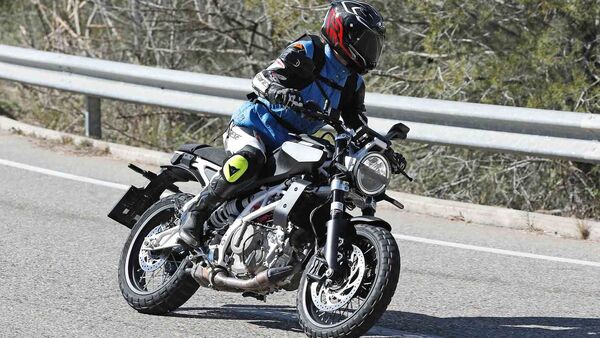 The upcoming Husqvarna Scrambler seems to be based on the similar neo-retro design theme as the existing Svarptilen 401 motorcycle.

Husqvarna is testing the upcoming Scrambler motorcycle which is expected to go on sale in the international markets next year. Though there is no official confirmation yet, it is expected to share the platform with the next-generation model of the Svartpilen 401 which was also recently spotted amidst road tests.

In terms of exterior design, it seems to be based on the similar neo-retro design theme as the existing Svarptilen 401 motorcycle, although there are some notable differences that make it distinctive. For starters, the round headlamp looks larger and flatter while the fuel tank sports a more muscular design with longer sides. The bike also gets a rack mounted on top of the fuel tank which has been designed quite neatly. On the top of the flat handlebar sits a rectangular instrument cluster which is most likely to a full-colour TFT display.

Over the side, the frame is still a steel trellis design, however, it is now completely redesigned when compared to the existing model, and behind it hangs a braced swingarm that appears to have been borrowed straight off the Husky’s E-Pilen concept bike.

At the rear, the motorcycle sports an extended tail section with a split seat setup. Since the seating is fairly flat, it might be even more comfortable than the Svartpilen's seating arrangement.

The suspension kit include WP Apex fork which isn't a big surprise, while for braking, it uses calipers identical to the one used on the current Svartpilen bike, however with different brackets.

Expect the launch of this bike to take place next year. It will also be accompanied by its cafe-racer derivative - Vitpilen.