Volkswagen Virtus aims to take on the boredom in the sedan space head on and possibly revive the segment in India. Does the Virtus have what it takes to play big and beyond?
By : Shubhodeep Chakravarty
| Updated on: 06 May 2022, 10:08 AM 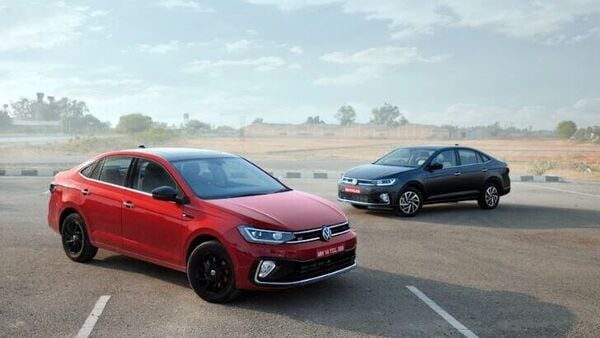 One sedan to rule them all, one sedan to find them. One sedan to bring them all, and in the darkness bind them. The sedan space may have been in the dark in the Indian car market in recent times but the all-new Volkswagen Virtus has long been promising to create a renaissance for the segment here. The challenge being thrown is as much to the existing crop of mid-size sedans already available as it is to a near frenzied craze for SUVs of all shapes, sizes and at varying price points. But for any sedan to not just lead in its own segment but fend off rivals in other segments, it needs to strike that perfect balance between styling, features, comfort and capable drive traits - all at a price point that doesn't put off the sentiments.

For Volkswagen in India, there have been many chapters to its sedan tale but none that has been remarkably well received. Whether it was the Ameo or the Vento or even the far more premium Jetta and Passat - the strong intent was met only with a lackluster response. But ever so often a model comes in with a fresh breath of air and in that sense, the Volkswagen Virtus is promising more of a storm than a gentle breeze. Will the Virtus manage to prop up Volkswagen to the pedestal of a rather tiny empire called sedans? In the words of Gandalf - Have patience. Go where you must go, and hope!

But you don't have to go anywhere and definitely don't need to hope one way or another because we recently landed in Amritsar to test drive the Volkswagen Virtus. The stretch running parallel to the India-Pakistan border near Attari evoked emotions of various kinds but it is the Virtus that sought to wage the biggest war Volkswagen may have ever had to wage in the country.

Here's the first-drive, road-test review of the all-new Volkswagen Virtus:

The Virtus is one of the better looking sedans one would find in the market at present. With ample amounts of Jetta cues on the exterior styling, the car manages to strike a perfect balance between traditional Volkswagen aesthetics and youthful curvature. So while the straight lines on the grille and bonnet are trademark VW, the sleek L-shaped LED DRLs and head light units are massively appealing. So while the single slat grille is something we have seen in past models, the tactful use of chrome surrounds and a wide air dam with fog lamps on the bumper lend it a strong face.

In fact the large size of the bumper at the front goes a long way in lending the vehicle a more pronounced look. This is more appealing on the GT Line - officially called Performance Line - than on the Dynamic Line, and yes, there are two broad trims that each have their unique bits. 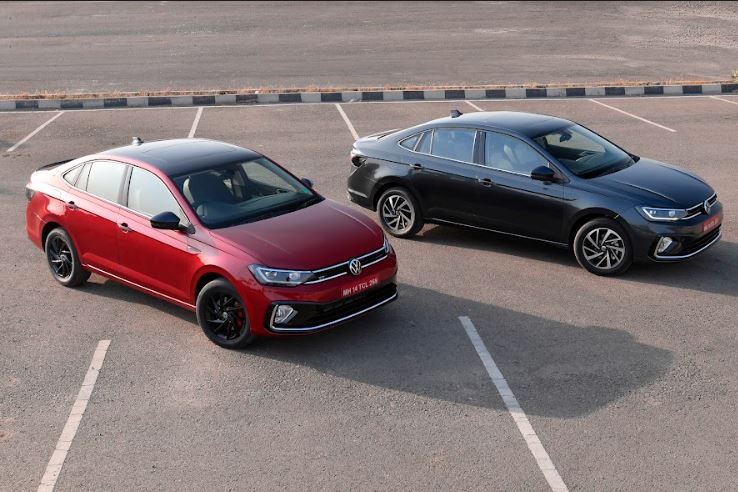 Volkswagen Virtus is taller, longer and wider than any of its rivals, barring cousin Skoda Slavia with which it shares its dimensions.

The Virtus in GT Line stands on 16-inch blackened alloy wheels, has a ‘GT Line’ badge on the front fender, chrome inserts on the door handles, chrome underline all across the window stretch and a dual-tone roof treatment in black. To further enhance the sportier appeal, the headlights have black masking, gets a lip spoiler at the rear and red brake calipers. Virtus offers 512 litres of boot space and the rear-seats have a 60:40 fold ratio to open even more options for cargo.

The Dynamic Line is slightly more sober but only in comparison. Chrome is still used as much as it is on the GT Line, and as tastefully as on the GT Line. The blackened LED rear lights are also common. 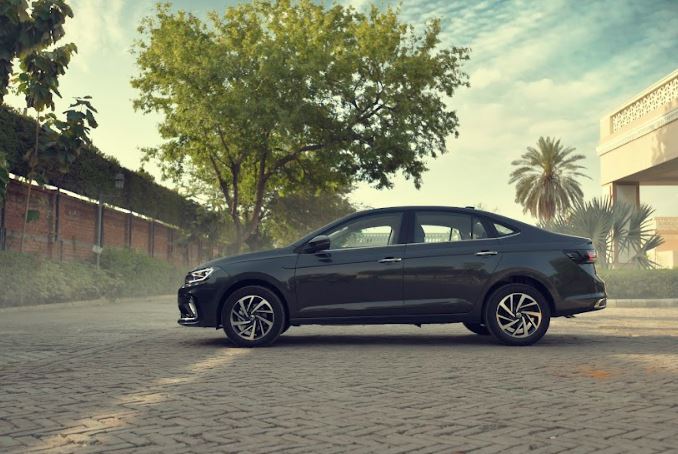 While we keep highlighting how looks of any car model can be very subjective, the Virtus is a good example of how to march on with the times while still holding firm to inherent styling dynamics that have long defined VW models.

Step inside the Virtus and here's where things get a bit tricky to explain. Much like what we saw on the Taigun, the Virtus GT Line also makes use of insert colours on the dashboard that is the same as the body colour on the outside. Personally, it continues to look extremely tacky even if the continuation means it is something that's working for VW. The same Cherry Wine Red colour on the outside that gives Virtus so much character looks oh so wannabe when used on the inserts. Thank the heavens that the Dynamic Line has a far more sober shade of grey-ish silver on the panel inserts here. 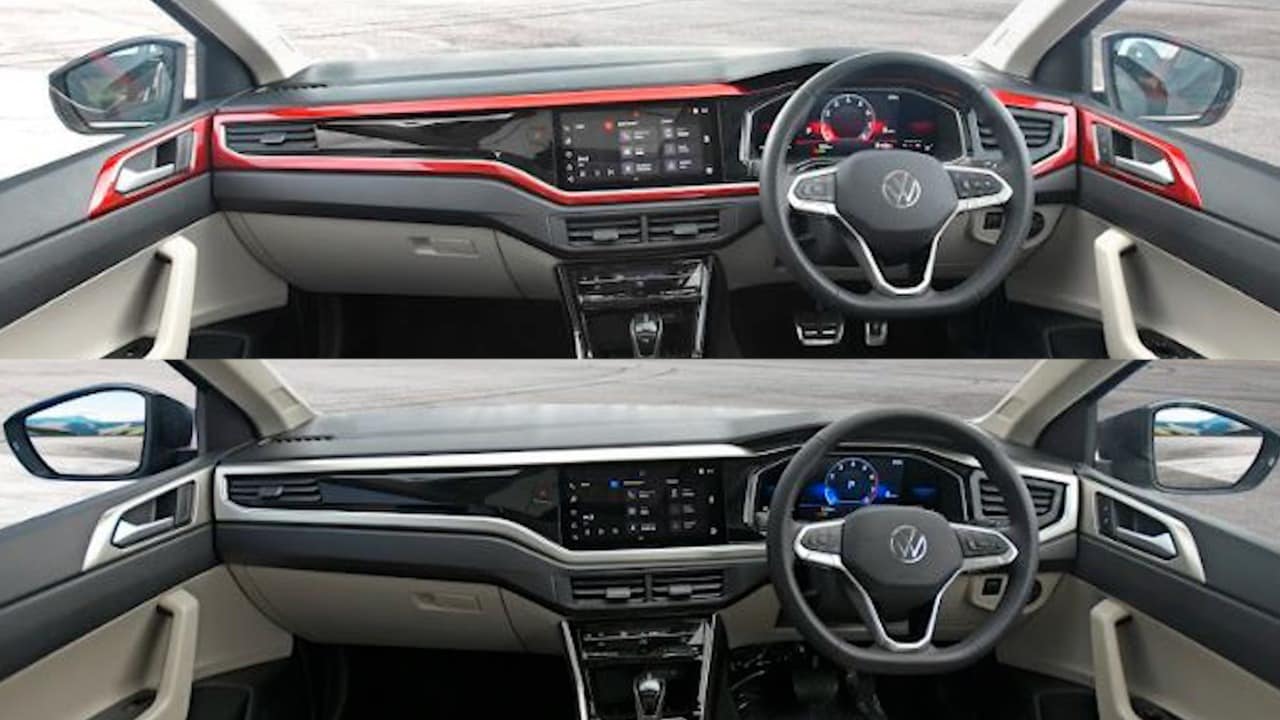 While the driver-focused dashboard layout is great, the inserts may not be to the liking of everyone.

The use of hard plastics on the dashboard and on the doors, however, is common to both, and frankly, take away a substantial chunk from the otherwise premium appeal of the cabin. I mean you have a splendid piano black finish on the dash and the center console, a well-appointed touch panel for controlling the air conditioning, a flat-bottomed control-mounted steering wheel and two vivid screens - why not go easy with the plastics?

This aside, and as mentioned, the cabin of the Virtus attempts to put on quite a premium guise. The 10.1-inch main infotainment screen has a sharp resolution and is extremely responsive to touch inputs. There is wireless support for Android Auto and Apple CarPlay with seamless connection. The driver display is also all digital with confident use of colours for a vivid output that can be customized by the person behind the wheel. 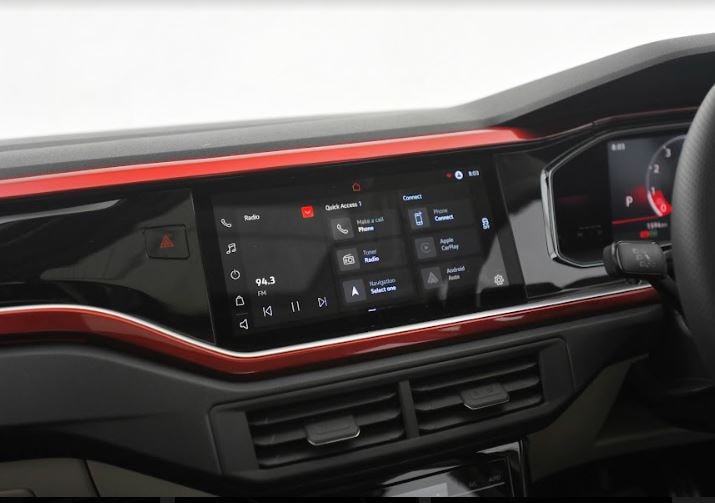 A look at the main infotainment screen inside the Virtus.

The center console is once again well appointed and while the piano black finish means you'll have to swipe a microfiber cloth over it often, it looks smart for most parts. A large storage space for wireless phone charging, Type-C charging points, controls for front seat cooling and a button for auto start-stop are all housed here. In all, there are eight speakers around the cabin.

The seats, with red stitching on the GT Line, are mostly comfortable even if I found them to be a bit too firm for my personal liking. This is also true for the rear seats but the fact that Virtus offers miles of space means that the firmness of the seats are soon forgotten. The Virtus has a longer wheelbase than any of its rivals, except for Skoda Slavia which is its cousin anyway. Ample amounts of leg room, knee room and head room make the rear seats perfectly suited for long journeys. The center console doesn't eat into the feet space for the middle-row passenger and there are charging points here as well. The effectiveness of the air-conditioning for the people at the back, however, wasn't on point exactly. That or Amritsar was just too blazing hot at temperatures at well over 42 degree C. Shut down that sunroof! Yes, there's one.

The Virtus will be offered in two trims - the GT or Performance Line which has a 1.5-litre petrol motor at its heart and a seven-speed DSG transmission. This unit produces 150 hp and 250 Nm of torque which is identical to that of the more capable Slavia. Then there is a turbo 1.0-litre petrol motor as well and this is on the Dynamic Line which gets either a manual transmission or a six speed AT, depending on what you choose. 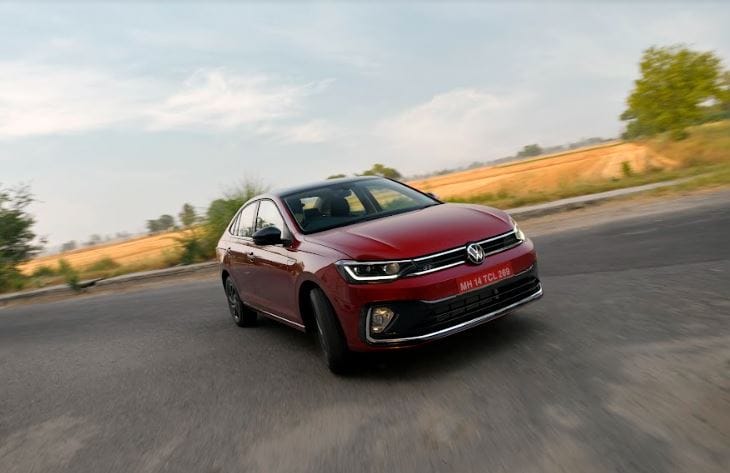 We started early in the morning with the more appealing GT Line and boy, did things get hot fast. Here I mean the car and not the weather because the thunderous four-cylinder TSI is every bit as capable as it is touted to be, sans the audible grunt and groan. Capable of hitting 100 kmph in under 10 seconds, the GT Line is fast off the line with the DSG unit ticking off numbers with superb precision. The acceleration is eager, the car is steady and regardless of speeds, the Virtus stays true to the solid build that Volkswagen is famed for. The Koreans have nothing on the Germans in terms of sheer drive capabilities and the Japanese aren't exactly up there either. Not yet anyway.

The suspension too is well tuned and it is only when the Virtus is hurled into extremely tight corners at high speeds that there is a trickle of body roll. But for most other parts, the more capable Virtus is also far more eager and more mature than most of its rivals. While Virtus performs best on open stretches of roads like this, it is capable enough to weave through city roads and traffic with ease as well.

But if it is a mile muncher that you want, it is the turbo 1.0-litre that plays the balancing act better. Our test unit by afternoon was one with the six-speed AT and while this is no DSG, it is no slugger either. Speed builds in a more linear fashion and the Virtus picks pace more at leisure. But in its own right, the AT manages to slot in the numbers fairly well and throttle responses, for most parts at least, aren't left wanting for some actual responsive action. There is very little doubt that in a cost-to-benefit ratio, it is the Virtus Dynamic Line with its AT that is most likely to take the crown. 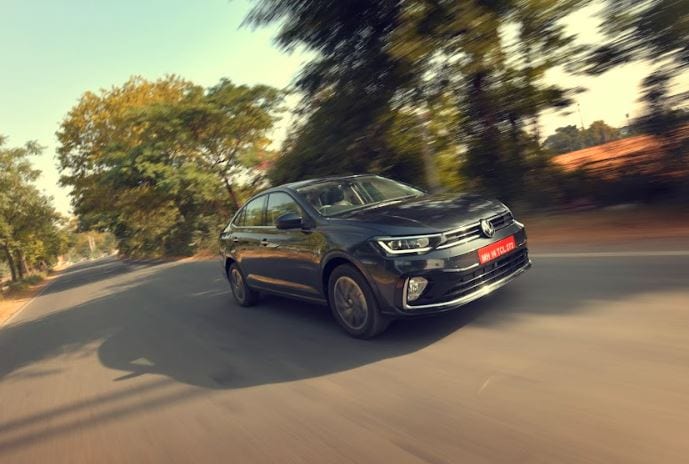 Virtus with its 1.0-litre motor will be more frugal than its more powerful twin although Volkswagen hasn't shared official mileage figures yet.

The name Virtus finds its origins in Latin and means valor, courage, manliness, character, excellence and worth. Let's not get into the gender debate about its perceived machismo but this sedan has valor and courage in great amount. It also has a fair bit of character, whether standing still or in motion. As for worth, well that would really depend on how well folks at Volkswagen price the model.

The Virtus is the second model from Volkswagen under the INDIA 2.0 project, after Taigun and is a confident expression of interest. It is also based on the MQB-A0-IN of the Volkswagen Group which also underpinds the Slavia. The Slavia starts at ₹10.69 lakh for the 1.0L TSI and ₹16.19 lakh for the 1.5L motor (ex showroom prices). Going by recent trends, Volkswagen Virtus is likely to be priced just above these figures and while that may mean that the GT Line is a tad too expensive, it should make the Dynamic Line a very, very worthy contender to not just revive but to possibly lead the mid-size sedan space. On that note, please allow me to indulge in one final Gandalf quote - The board is set, the pieces are moving. We come to it at last, the great battle of our time. Will the battle of sedans and for sedans have a virtuous leader? Time and you, the customer, will tell.