Lexus UX 300e EV may be brought to Indian shores but is the market here ready for another luxury battery-powered car?
By : Shubhodeep Chakravarty
| Updated on: 31 May 2022, 02:26 PM 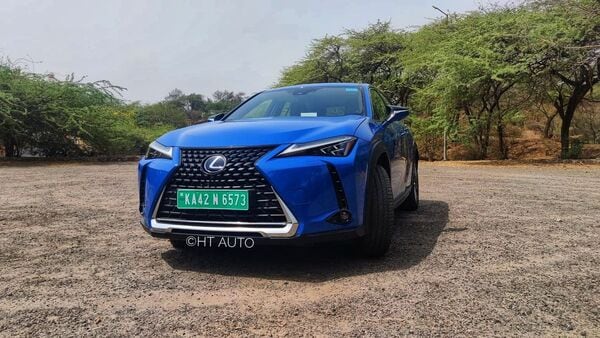 Lexus UX300e takes strong styling cues from its siblings in the family while still looking at carving out its own niche identity,

Lexus has been making and selling hybrid electric models across the globe for more than a decade and a half. Having sold hundreds of thousands of hybrids in various markets across our world, one would have imagined an all-electric Lexus to have been a fairly common sight by now. Alas, the top gear in hybrids hasn't maintained its momentum when it comes to fully electric battery-powered models for the Japanese brand even if ‘late is better than never’ is a mantra being followed now. And in this regard, the Lexus UX300e is a highly ambitious model and one that is carrying the enormous weight of expectations. After all, being the first all-electric Lexus is a prestigious crown but one that also invites a whole lot of responsibilities.

Here in India, the task for the UX300e is even more challenging. First things first though - Lexus hasn't officially launched the model here. It hasn't even confirmed if it would but instead, is conducting feasibility tests. It is as much a test for the EV as it is of the market and how it could potentially receive this particular model. But as mentioned above, the task is quite challenging because Lexus remains a very niche brand in the luxury segment and EVs at large are quite an exclusive segment anyway. Then again, the electric mobility space is leveling the play field with niche brands potentially having as much share for the taking as established players on the one end of the spectrum and startups on the other. In that sense, the UX300e may well be a emerge as a game-changer. Or can it?

Here's the first-drive review of the Lexus UX300e:

The world is gradually moving towards electric mobility and in the automotive industry at large, a rapidly expanding customer preference for the SUV body type has been observed regardless of drivetrain. Very little wonder then that many key players have opted for big and dominant SUV body shape for their respective electric offerings. Take the BMW iX, Mercedes EQC and the Audi e-tron, or even the smaller Volvo XC40 Recharge as examples. But SUVs can have crossover elements too and can be compact enough for easy city maneuverability. Just take a look at the Jaguar I-Pace. 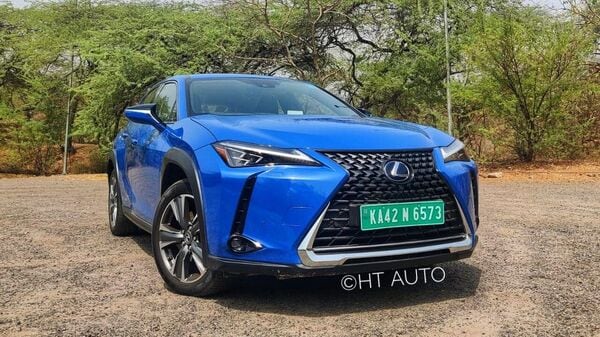 The UX300e from Lexus may have the most stylish face of any luxury EV available already in India.

And in that same vein is the Lexus UX300e as well - more of a compact crossover SUV than a gung-ho, ‘get-out-of-my-way’ vehicle. It is slightly shorter in length, width and height than the I-Pace but still has plenty of Lexus pedigree to grab attention. The trademark Lexus spindle grille was always a given and so were the typically Lexus, typically sleek LED head light units with DRLs. There are a plethora of character lines on the face and on the side which stand as evidence that Lexus designers were given an absolute free hand in bringing their artwork to automotive fruition.

The UX300e stands on 17-inch wheels with 18-inch alternatives offered as optional in overseas markets. The design of the alloys are quite sporty which further helps the visual appeal of the EV, along with the tapering roofline over the C pillar. In fact, the only part where this model appears to have a more dominant than stylish persona are the large wheel arches encompassing the wheels.

Return to the rear and it is a return to the same emphasis on style with the LED lights here protruding from either of the two overhangs and a strip light bar extending across the length of the trunk.

Overall, there's nothing dramatic about how the UX300e looks though but that may well be the stated objective considering how Lexus goes about emphasizing its sensuous design philosophies.

Step inside the UX300e and it is a bag full of mixed emotions - some great and some with scope for improvement. It is plush for sure but one won't accept anything less from a Lexus model. So the dashboard materials, the quality of upholstery and even the intricate stitch-work are examples of attention to detail yet again. The layout is oriented towards the driver so that's great as well. The ‘now considered usual’ features like support for Android Auto and Apple CarPlay, phone charging stations, sunroof and ventilated seats were always going to be incorporated. 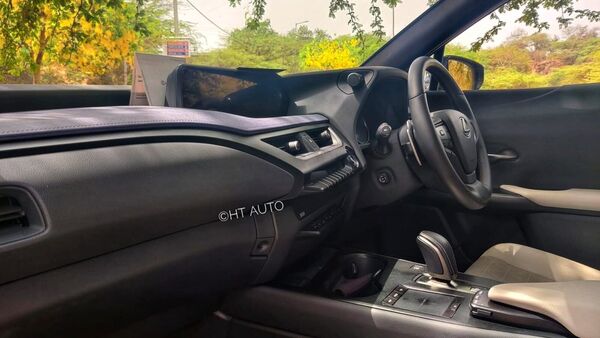 A look at the dashboard layout inside the Lexus UX300e.

But at a time when infotainment touch screens are quickly becoming the main highlight of vehicles across segments, Lexus vehicles - including UX300e - remain rather dated because these aren't touchscreens at all. A track pad on the center console is, for anyone who has ever been inside a Lexus, mighty cumbersome to make use of. for managing infotainment controls. For a driver on the move, it is outright risky. There is no rotary dial either that could have still earned this car some points in this regard. Besides, there is a learning curve involved here which would put off first time Lexus buyers, if there would be any for UX300e. But once one does get the hang of it, the premium Mark Levinson sound system goes beyond its line of duty to stamp the luxury credentials of a cabin from this brand.

For the passengers at the back, the UX300e offers precious little. The quality of materials here remain top-notch but that's it, absolutely it. Limited knee and leg room, zilch under-thigh support and just about acceptable levels of head room means showing off your EV to your gang with a drive to the mall may not be such a great idea after all. And if at the mall, try not to shop much because this EV has 367 litres of cargo space. For reference purpose only, this is as much boot space as you get in a Honda WR-V.

Overall, the space inside the UX300e like you ordered for two seats and got the rear seats as complimentary add ons. What saves the EV model somewhat though is its superb material and upholstery quality.

If the cabin is a hit and miss, the UX300e does well to make up for it through its drive traits. With a 54.3kWh battery at its core and an electric motor powering the front wheels, the Lexus EV puts out 201 bhp and offers 300 Nm of torque. These numbers are decent when viewed alone even if some of the EVs UX300e hopes to take on have more impressive numbers. We are looking at Volvo camp here. 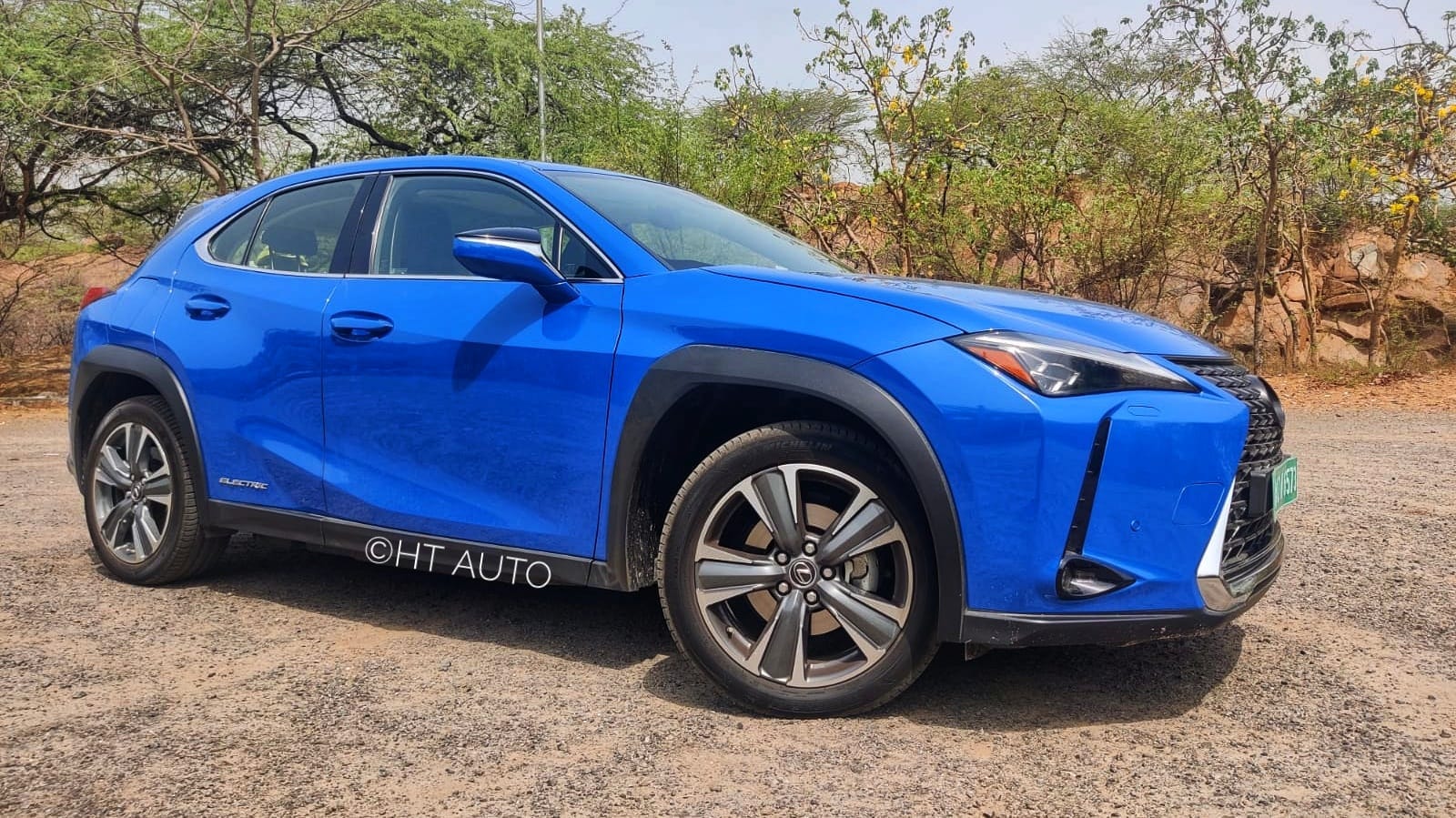 Square-ish wheel arches lends a bit of character to the Lexus UX300e, both when standing still and on the move.

But the UX300e does still have an eager nature about it even if the Sport mode isn't engaged. In our review, we made the EV munch most miles in Eco Mode and while the adrenaline levels were rather sedate, it was the firm control that impressed us most. The steering set up is solidly steady and the suspension is tuned well to help the EV transcend India-specific challenges - road craters, unscientifically prepared speed breakers and the likes.

The re-gen was also quite good with the braking on point without feeling overwhelming. Could it have been stronger still for more energy going back to the battery? Perhaps. Am I complaining. Certainly not.

Lexus UX300e claims to have a range of around 300 kms per charge. When we received our unit, the driver display showed it was good enough for another 245 kms. Apart from the number, this screen also has a charge gauge much like we have in petrol and diesel-powered cars - talk of being stylishly old school.

We kept monitoring the odometer and the range left, and the two figures - one obviously going up and the other coming down - matched perfectly. And this is great. As mentioned, we kept the UX300e within city limits and in Eco mode for most parts barring performance-testing sprints but even then, the range-related information is exceptional with its accuracy. As for the range available on full charge itself, well, the rivals may have more of a bragging right here.

Lexus as a brand is counted as a symbol of conscious luxury and perhaps this is why its vehicles are more exclusive than products from its German rivals. But the fact that the brand is now looking at expanding its wings in India is amply evident and even testing the UX300e here is a superb show of intent.

As for the UX300e itself, it is a confident model that is perhaps a year or two too late. Yes, even if the EV market in India remains nascent. The luxury EV buyer in the country is someone who has at least one luxury car powered by petrol or diesel at home. It could be a Lexus too. But now, he or she has options and can glide from one brand to another to make a purchase that not only makes a statement but delivers on the opulence and comfort he or she is accustomed to.

The Lexus UX300e delivers on the cabin opulence, has the looks to impress and drives fairly well - all key attributes of a luxury EV. But rear-seat space and range are limiting factors to varying extent. If Lexus steps out of its comfort zone - and it has in the past - and prices the UX300e aggressively - remember, it would be a CBU model - it could be a confident showing of just how serious it considers the Indian market. Else, it would remain a mere sign of what the brand is capable of.