The government will release a notification today directing oil companies to sell ethanol-blended petrol from April 1, 2023.Union Minister Nitin Gadkari had said that blending ethanol with petrol can help reduce vehicular pollution and save costly fuel imports.
By : HT Auto Desk
| Updated on: 05 Jun 2021, 11:42 AM 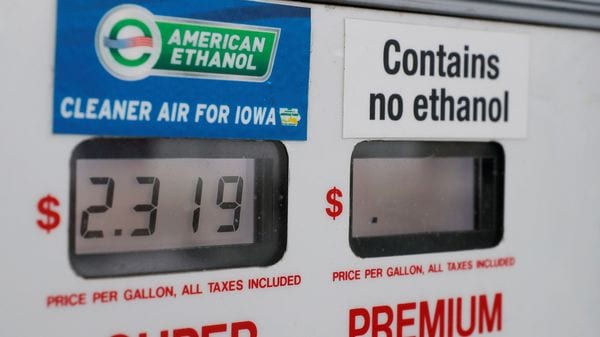 File photo of a gas station including ethanol-based fuel in US.

India's focus on alternative fuel will take a step forward today as the government gets ready to issue a notification asking oil companies to start selling ethanol-blended petrol in two years' time. The government had recently approved the increase of ethanol blending in petrol. The Ministry of Road Transport and Highways (MoRTH) approved the use of E-20, a mix of 20% ethanol and 80% petrol.

Nitin Gadkari, Minister for Road Transport and Highways (MoRTH) has been pushing for alternative fuel for vehicles in India in an effort to not only bring down vehicular pollution, but also reduce dependency on costly fuel imports.

Prime Minister Narendra Modi is all set to release the 'Report of the Expert Committee on Road Map for ethanol blending in India 2020-2025' today to commemorate the World Environment Day, along with the E-20 notification clearing way to use ethanol-based fuel.

The government's move comes at a time when the conventional fuel prices have hit an all-time high in India. Petrol price has breached Rs-100 mark at several places, including Mumbai, in the past few weeks.

India will not be the first country to use ethanol-based fuel to run vehicles on road. In fact, countries like United States and Brazil have already been using it as an alternative fuel for quite some time.

To make ethanol-based petrol more mainstream, Nitin Gadkari has urged carmakers in India to start producing flex engines. These engines are compatible with ethanol-based fuel. Gadkari said flex fuel vehicles could help the Centre reduce cost of oil imports and also bring down prices since ethanol is available a lot easily these days,

"All the foreign OEMs like Hyundai, Toyota etc are operating with flex engine in Brazil and USA. To reduce pollution in Delhi, we also promote electric vehicles and vehicles with flex-engine option," Gadkari had said.

Gadkari had earlier said that there is a need to develop indigenous technology for flex fuel vehicles. According to Gadkari, two-wheelers in India alone consume over 70 per cent of petrol.