Why Tesla’s success is a ‘headache’ for Volkswagen

Volkswagen chief Herbert Diess admitted that the company is still a long way from catching up with Tesla on software expertise.
By : Sabyasachi Dasgupta
| Updated on: 28 Apr 2020, 09:30 AM 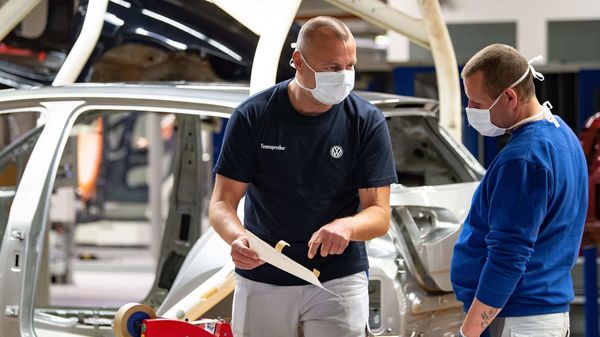 Employees of German car maker Volkswagen work on the assembly line of the company's plant in Wolfsburg.

The success of Elon Musk's e-car maker is a problem for Volkswagen boss Herbert Diess. "Headache" is what gives him Tesla's superior software expertise. But Diess has a plan on how to catch up.

The Volkswagen group attests Tesla's superior software competence and wants to target the California electric carmaker with a catch-up plan. "What worries me the most is the ability to work with the assistance systems," Herbert Diess was quoted from a Volkswagen internal webcast.

"500,000 Teslas function as a neural network that continuously collects data and offers the customer a new driving experience every 14 days, with improved properties." Diess conceded, "No other automobile manufacturer can do that today."

At Volkswagen, the newly founded car software organisation is now to "implement the Tesla catch-up plan". The integration of high-performance software in new models presents Volkswagen with far greater challenges than the electrification of the fleet, said Diess.

Tesla's vehicle access without a key, the bundling of many functions on just one screen and the reduced design were well received. "Customers love it," said the Volkswagen chief.

Volkswagen is pressing ahead with the manufacturing of the ID.3 electric car and expects to start European deliveries this summer as planned, despite lingering uncertainty surrounding demand for vehicles amid the Covid-19 pandemic.

Volkswagen is pinning its hopes on the success of the ID.3 to be its first purely battery-powered car based on new standardised underpinnings for mass-market vehicles, helping the German automaker comply with stricter emission rules in Europe that take effect this year. Making the switch to electric vehicles was proving the biggest and most costly headache for the industry before the Covid-19 pandemic halted production and shuttered dealerships worldwide.

Diess also presented its top managers with a graph that showed Tesla's valuation twice as high as that of Volkswagen. "And that despite our valuable brands like Porsche, Audi, VW, Bentley and the others," said Diess. In addition, the Diess trusts the US rival Tesla led by Elon Musk after his "walk through the production hell" to "increase the volume significantly". Diess' blunt conclusion was: "There is still a long way for us."