The German carmaker has assured that these vehicles will be updated before deliveries to the customers.
By : Sabyasachi Dasgupta
| Updated on: 29 Feb 2020, 09:58 AM 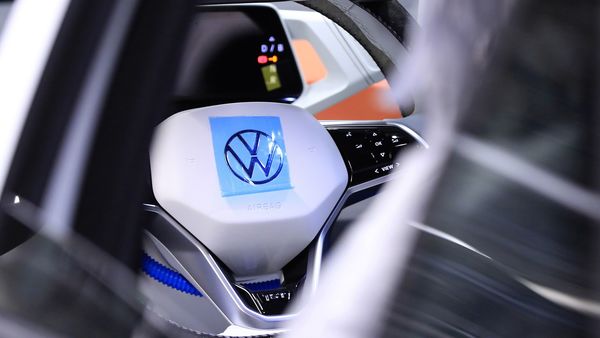 A protective film sits on Volkswagen logo on a VW ID 3 electric automobile steering wheel during final quality checks at the automaker's factory in Germany.

A few days ago a German magazine exposed serious software problems that the Volkswagen ID.3 was suffering, which could delay the launch of the electric compact car by up to a year.

Now Volkswagen has officially confirmed that this is not true. According to Andreas Grob, spokesman for the Volkswagen electric mobility area, ID.3 keeps its deadlines intact, with production starting in November 2019 and first deliveries this summer.

He has also added that by the start of deliveries, Volkswagen will have 30,000 units ready to deliver simultaneously.

As for the software problems, it had been rumoured that Volkswagen would opt for an intermediate solution, delivering the vehicles with an unfinished system, which would be updated later. But the brand spokesperson has indicated that these vehicles will be updated before being picked up by customers.

The Volkswagen ID.3 EV uses the APP310 electronic drive to transmit power to the drive wheels using an extremely compact 1-speed gearbox. The mechanism used has only a small number of gears. This 1-speed gearbox is part of the electric drive system for the MEB Modular Electric Drive System and is manufactured by Volkswagen Group Components at the Kassel plant.

The new ID.3 has a size similar to that of Golf and will be offered with three different finishes and powertrains. The ID.3 Pure can do up to 330 kilometres, while the Pro will have a range of 420 kilometres, which will rise to 550 kilometres in the case of the Pro S variant.

The ID.3 battery is guaranteed for 8 years or 80,000 km. Each cell has 34 volts and each module has 24 cells. The batteries it equips are LG, but the brand has reported that they are building a cell factory next to the Northvolt company. The chemical chosen for the battery is lithium-ion, and incorporates less cobalt than usual.