Tom Cruise drives his motorcycle across an elaborate ramp constructed on a remote Norwegian cliff and then jumps off with the bike.He remains air-bound till his parachute gets released.
By : HT Auto Desk
| Updated on: 30 Aug 2021, 04:03 PM 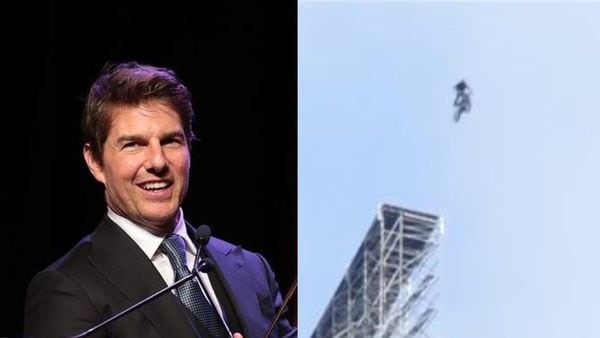 Hollywood actor Tom Cruiser drove a motorcycle off a giant cliff in Norway while shooting for a stunt in his upcoming movie Mission: Impossible 7. The actor, who is known for performing his own dangerous stunts, showed a clip of the motorcycle stunt during a gathering of movie theater operators and Hollywood studio executives at the CinemaCon in Las Vegas, Nevada, US.

The video clip was an aerially shot footage of the actor who jumps off the giant cliff with his motorcycle and remains air-bound until his parachute is released and he lands back safely.

Cruise trained for the stunt for more than a year by taking at least 500 sky-diving sessions and 13,000 motor-bike jumps, while the original stunt was filmed a total of six times, as reported by Hollywood Reporter. "This is far and away the most dangerous thing I’ve attempted; we’ve been working on this for years," Cruise told Deadline Hollywood. "I wanted to do it since a little kid."

The Hollywood actor's preparation for the bike stunt was showed as behind-the-scenes footage, where he performs sky dives and motocross jumps, during the convention. He then traveling on his motorcycle across an elaborate ramp constructed on a remote Norwegian cliff to shoot the stunt itself.

Christopher McQuarrie and Tom Cruise are taking Mission: Impossible 7 to another level pic.twitter.com/eZaa5z8s5Y

Known for having a penchant for performing stunts, Cruise, in his past movies, has performed stunts where he hung off the side of a plane as it takes off. He has also piloted a helicopter through narrow mountain ravines, scaled the 2,717-foot high (828 meters) Burj Khalifa skyscraper in Dubai, and performed a sky dive from almost five miles high. While shooting for a stunt in the Mission: Impossible - Fallout, Cruise broke his ankle during a stunt.

Mission: Impossible 7 is due for release in May 2022, and has been shot in Italy, Norway and the UK for more than a year.