Alex Harvill, 28, died in a fatal accident while practising ahead of his attempt to break motorcycle ramp jump record.Harvill is survived by his wife and two sons.
By : HT Auto Desk
| Updated on: 21 Jun 2021, 04:03 PM 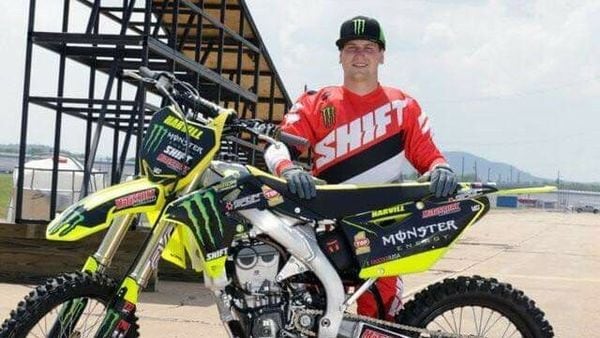 Popular motorcycle stuntman Alex Harvill died while he was practising for a world record jump at the Moses Lake Airshow in Washington. He was 28 years old. Harvill wanted to break the Guinness World Record for the longest motorcycle ramp jump but fatally injured himself in a warmup jump before the record attempt.

According to media reports, Harvill was attempting the jump from a pre-constructed, moveable ramp to a dirt ramp at a height of 351 feet. Reports also added that the Grant County Coroner’s Office had confirmed the stuntman died of injuries he suffered from the accident. Screengrab from the video that was posted on YouTube when the practice jump was being performed.

The current record jump of 351 feet was set by Robbie Maddison, an Australian motorbike stuntman, in March of 2008. Maddison took to Instagram to express his grief regarding the fatal accident. He posted a picture of the location where the stunt was being performed with Harvill in action. “Shattered about the news of the passing of @ah352 he had flown a motorcycle further then anyone else has and was out to set a new world record today when he paid the ultimate price. My heart is broken for his family. Sending our love To Jessica, Willy and Watson. R.I.P Alex Harvill," he wrote in the caption.

In 2013, Harvill had set a record for dirt to dirt distance jump at over 297 feet. In an interview to a local newspaper of Central Washington, he had said that he had been riding since the age of four, but before that, he rode on the front of his father's bike. "My entire life I've ridden dirt bikes and looked up to everyone that races dirt bikes and think of those guys as heroes," he had said in the interview.

Harvill is survived by his wife Jessica and kids named Willis, who is five, and a newborn son named Watson Robert Harvill.