While the biker was seen walking away without any significant injuries, the same couldn't be said about his sportsbike that was destroyed in the crash.
By : HT Auto Desk
| Updated on: 21 Aug 2021, 02:14 PM 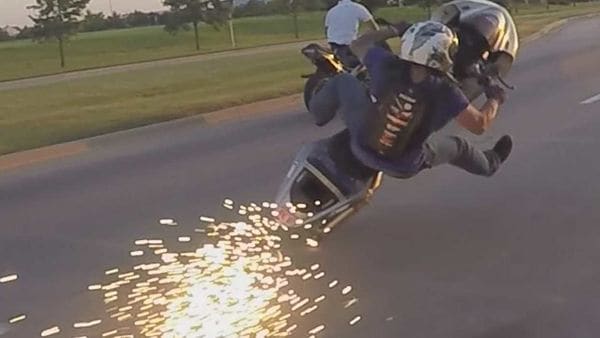 If you've ridden a motorcycle you will know that pulling off wheelies is tricky and definitely not safe on public roads, or anywhere where other motorists are also involved. Now a recent motorcycle stunt video has gone viral on the internet for all the wrong reasons. The clip was uploaded over Reddit where a rider was filmed pulling off a wheelie and then crashing within seconds, throwing the motorcycle right at the oncoming traffic. The event was filmed by the passenger of a car travelling in front of the biker.

Needless to say, that the rider's decision to show off his stunting skills on the public roads turned into a nightmare, but it could have turned even worse. Thankfully the motorcyclist was seen wearing a proper helmet and kit that was put to use when he hit the surface but walked away with minor bruises.

The rider has been attracting a lot of heat from the viewers for his stunt that nearly killed him. While one of the users wrote, “Feel bad for the dude in the car that now has a bunch of front end damage because of some jackass squid", another user also blamed the rider saying, “It's all going to be paid for by the idiot with the bike. The damages, whatever hospital bills, and whatever he has to pay when the owner of the car sues him. He'll also never legally ride a motorcycle again,"

While the biker can be seen walking away without any significant injuries, the same couldn't be said about his sportbike that is nearly destroyed in the crash. Not to forget, the car (a Nissan) which the bike slammed into also faced heavy damage.