The Tesla electric vehicle's front face has been completely shattered, making it almost unrecognisable.The driver of the electric sedan was lucky enough to escape without any injuries.
By : HT Auto Desk
| Updated on: 08 Apr 2021, 12:00 PM 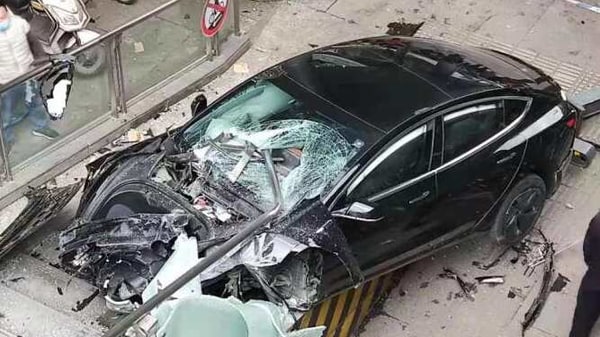 A Tesla Model 3 electric sedan recently collided into a pedestrian overpass in Chengdu, the capital of China’s Sichuan province while also hitting a person on an electric bicycle near by, according to a local news report.

The rider of the e-bike was injured and rushed to a near by hospital while the driver of the Tesla was lucky enough to escape without a scratc. The reason of the accident has been attributed to an error on the 51-year-old driver's part who lost control of the vehicle due to “improper operation." Though the cause of the accident is not completely clear, the local police was quoted as saying, "Due to improper operation, the vehicle lost control and collided with the electric bicycle."

Images from the accident scene released by local media shows that the electric sedan's front fascia has been completely shattered, making it almost unrecognisable from the face. The bonnet, grille, windshield, headlights and bumpers, all have been wrecked. The wheels have also gotten detached from the vehicle. Even the belly of the car seems to have sustained damages. 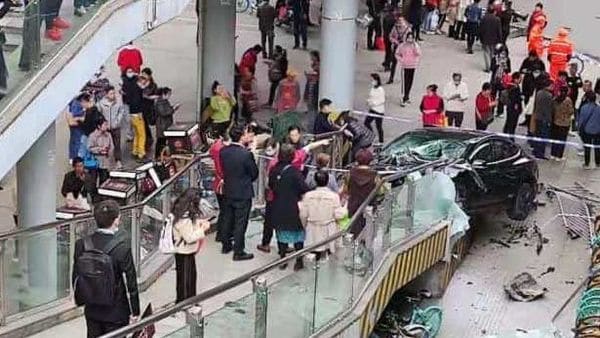 Apparently, the car first collided with the steel railing to the left of the stairs of the passenger overpass and then went a few steps up towards the passenger walkway.

In other news, Tesla has lately been under fire in China due to various autopilot-related accidents and some quality issues. In fact, Tesla EVs have been banned from military complexes and housing compounds in the country. As per a report, the primary cause of concern in China has been the potentially sensitive data being collected by cameras that have been integrated into Tesla electric vehicles. Thus, having a Tesla vehicle inside sensitive zones could be risky from a military perspective.

Tesla cars are fitted with a number of cameras which help owners make use of functionalities like guided parking, autopilot and self-driving capabilities.