The Tesla Model X smashes into the public bus' windshield and also hits its side body with its open falcon wing door.Fortunately, there has been no report of any injury caused due to the accident.
By : HT Auto Desk
| Updated on: 17 Aug 2021, 05:47 PM 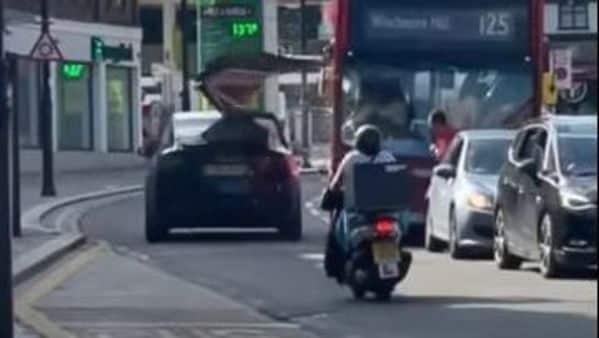 Apart from the windshield of the bus, the video also shows the falcon wing door of the Tesla Model X hitting the side of the bus. (Pic courtesy: Screengrab of a video posted on YouTube by Rahul R)

A Tesla Model X was recently filmed slamming into a public bus with its right-side falcon wing door open at A111 highway in Southgate, London. The electric sedan exited a parking spot with its rear door open and merged into the traffic with the door ‘flying’ in the air. While passing a red-coloured two-storey public bus, the edge of the door smashed the windshield of the vehicle.

Post the crash, the video shows a big crack on the windshield of the bus while the falcon door of the Tesla Model X seems to have broken. The door immediately comes down just like a when a bird closes its wings. Fortunately, there is no report of any injury caused due to the accident. One of the reasons for this could be that during the time of the accident, both the vehicles were in a slow speed because of the traffic on the stretch of the road.

The sole reason for this accident is carelessness on the part of the Model X driver. As per a Motor1 report, when a Tesla Model X is driven with either of the doors open, both the digital dashboard and the infotainment screen display visual warnings. The driver also gets audio alerts from the vehicle's software.

(Also read | Watch: When a Toyota Camry crashes into a Tesla Model S)

The driver missing out on such prominent signals or warnings about the door being open makes one wonder about where was his/her focus. A YouTuber user commented on the video reiterating this. He said, “You'd have to be ignoring the alarm sound and the screen popup telling you a door is open for this to happen. What was the driver even doing???"