Watch: Toyota driver repeatedly rams into car behind; displaces it to make way

The front bumper of the car gets damaged when the Toyota driver forcefully displaces it.After displacing the Hyundai car, the Toyota driver speeds off from the location.
By : HT Auto Desk
| Updated on: 10 Aug 2021, 02:36 PM 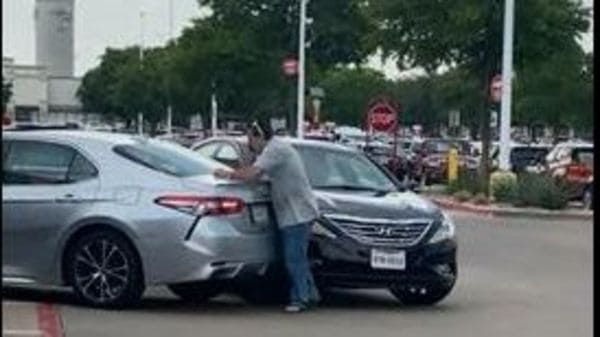 The driver of the Hyundai car tries to save his vehicle despite facing the risk of being in injured. (Image source: Screenshot of a video posted on YouTube by ViralHog)

Hit and run cases around the world are nothing new but in a video that recently surfaced on YouTube, a woman in a Toyota Camry can be seen involved in one of the most insane hit and run incidents ever. She reportedly hit a Hyundai Sonata behind her in a parking lot but instead of apologizing, she started yelling at the Hyundai driver and repeatedly ramming into his car.

The video, recorded by an onlooker, shows the woman getting out of her Toyota and asking the man driving the Hyundai to move and make way for her. When the man doesn't obey, she starts moving her car back and forth while repeatedly hitting his vehicle. The man can be seen coming out of his Hyundai all surprised at her behaviour. As he tries to save his car, the Toyota also hits him slightly.

(Also read | Watch: Police patrol vehicle rams into SUV to bring it to halt. Here's why)

The women then rams into the Hyundai vehicle with utmost force and forcefully displaces it from its parked position. All this while the man tries to save his vehicle despite facing the risk of being in injured by the Toyota vehicle. The onlooker can be heard yelling, "Sir, you need to move."

(Also read | Watch: When a Toyota Camry crashes into a Tesla Model S)

After she forcefully moves aside the Hyundai vehicle, the woman starts turning her car while the other driver still hovers behind her Toyota. Without an iota of worry of hitting the man in the process, the woman continues turning the car. She finally speeds off and leaves the parking lot after committing an illegal act.

The Hyundai Sonata's front bumper gets damaged when the woman forcefully displaces it. The side of the front fascia also suffers dents from being repeatedly rammed into. Meanwhile, the onlooker can be heard informing the police about the incident. Though it is unknown if the police caught the woman but the video is aa clear proof of her vehicle number and her voluntary disregard to his life or property.