Watch: When a Toyota Camry crashes into a Tesla Model S

The incident took place in Victoria, Australia.There is no official report of anyone getting injured.
By : HT Auto Desk
| Updated on: 07 Aug 2021, 03:21 PM 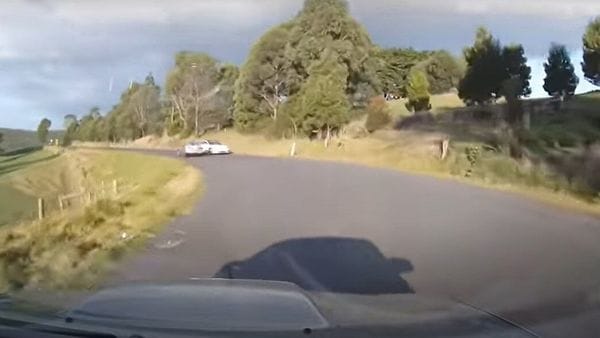 Screengrab from the video posted on YouTube by Dash Cam Owners Australia.

A video has surfaced where a Toyota Camry can be seen crashing into a Tesla Model S as the former over speeds on a country road. The incident took place in Victoria, Australia and was recorded through a dashcam of the car that followed the Toyota vehicle.

One can see in the footage that was uploaded on YouTube that a Toyota Camry is speeding down the country road of Victoria. The driver also takes precarious lines along with the corners and can also be seen frequently crossing into the opposite side of the road. One can notice a Tesla Model S electric car approaching from the opposite as soon as the Toyota enters a left-hand bend in the middle of the road. In a panic, the driver applies brakes that lock the rear wheels pushing the car into the side of Tesla. Following this, the Toyota fishtails to the left side of the road run through a strip of grass and then slides down an embankment before getting stuck in a fence.

(Also read | Watch: Police patrol vehicle rams into SUV to bring it to halt. Here's why)

The video has garnered a significant number of views and also received humorous comments that criticised the Toyota driver's driving skills. One went ahead to say that an invisible force field around the Tesla EV pushed the Camry into the ditch whereas one said that this is the result when the level of skill does not match the level of enthusiasm. One also called it a scene from a live game.

There has been no news of any report submitted by the authorities regarding this crash. Also, no report of anyone getting injured in this accident has been made.