Watch: Police patrol vehicle rams into SUV to bring it to halt. Here's why

Police officers in Austin, Texas were investigating a fatal crash when the SUV decide to break through barricades and drive away.After stopping the SUV and talking to the driver for a while, the police officials allowed him to go.
By : HT Auto Desk
| Updated on: 03 Aug 2021, 09:32 AM 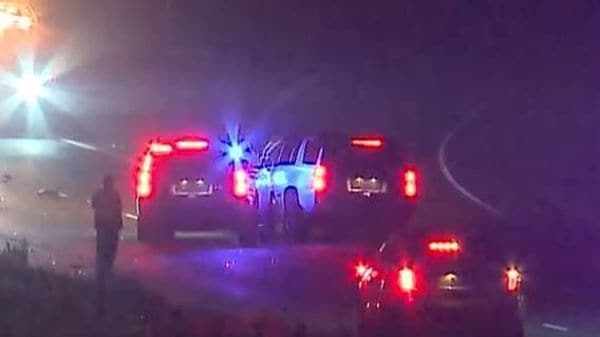 What would you do if you were ever stuck in an active crash scene while police officials are carrying on their investigation? Most people would wait for the cops to signal them to leave or wait for them to finish their work on the stretch of the road. However, that is not something that suited the personality of an SUV driver stuck in an active crash scene in Texas, US.

In a recent footage shared by local media, an SUV can be seen seen driving slowly past on active crash scene while a police patrol unit can be seen following it. Just when the SUV reaches a little farther, the police vehicle takes a slight turn towards it and rams into it to bring it to a halt.

(Also read | Watch: This horror crash shows why texting while driving is too darn risky)

The Austin Police was investigating a fatal crash that took place on Loop 360 in the city and had closed the entire northbound lanes to the motorists. That is when the SUV broke through the barricades and tried to drive past the crash scene, KXAN News reported.

However, after stopping the SUV and talking to the driver for a while, the police officials allowed him to drive away, the report stated. The officials said that though they could not charge the driver this time, this could change sometime in the future. This is because law in Texas allows vehicles to drive past an emergency vehicle or tow truck on the road if either they move over a lane or slow down their speed to 20 miles an hour or less. If the vehicle is in a residential area, the speed needs to be reduced to 5 miles an hour.

A police office told the local media that while they are out on road doing "dangerous job", they "can’t always be paying attention for a car that might come running" into them.