Home Auto News Watch: This Horror Crash Shows Why Texting While Driving Is Too Darn Risky

Watch: This horror crash shows why texting while driving is too darn risky

A lorry driver from England was seen continuously using his mobile phone while driving in a video footage captured by a camera in the vehicle.The footage has recorded 42 separate incidents of his poor driving behaviour.
By : HT Auto Desk
| Updated on: 01 Aug 2021, 02:04 PM 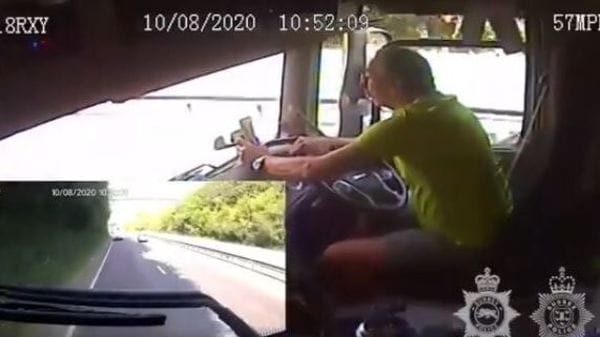 A 52-year-old lorry driver from Seaford, England was sentenced to three-and-a-half years in jail on Tuesday for dangerous driving and on three counts of causing serious injury by dangerous driving. The Sussex Police has released a video of the driver crashing his lorry into the back of a van the moment he was using his mobile phone. The video is being highlighted as the dangerous implication of using a phone while driving.

The video footage has been taken from two cameras fitted inside the lorry of Derek Holland that captured him while he was on a four-hour journey via the A27 highway in England last August. In the duration, at least 42 separate incidents of Holland's poor driving have been recorded, the police said in a release. This included continuous use of mobile phone and not wearing a seatbelt.

(Also read | Cameras to catch drivers on phone, without seatbelt launched for the first time)

Watch how a texting lorry driver crashes into a van on the A27, seriously injuring three people.

We’ve released this video to highlight the significant implications of driving while using a mobile phone, after the driver was jailed.

Other instances included taking his both hands off the wheel to peel a banana and to wave at traffic lights. In fact, Holland used a replica seatbelt buckle in the socket throughout the journey to prevent the alarm from activating. He can be seen putting on an actual seatbelt only when he sees a police car in front of him. He then takes off the seatbelt as soon as the police vehicle goes out of sight.

The vehicle that he collided into was a police security van which was parked in a lane in a broken down condition. The three people who sustained injuries due to the crash were the driver of the van, a prison escort and a prisoner. After this horrific incident, Holland was arrested and he admitted that his behaviour was "atrocious".

He pleaded guilty to all four charges in front of the Hove Crown Court on Tuesday after which he was sentenced to jail. He has also been disqualified from driving for 57 months and will have to take an extended re-test if he wants to ever drive again.

The court also advised drivers to not engage in any activity that causes distraction during driving as it could lead to damage of life and property and the driver could be punished for not being in proper control of the vehicle.