Transport minister Nitin Gadkari listed the reasons for such mishaps as over speeding, drunken driving, driving on wrong side/lane, use of mobile phones during driving, among others.The number of road accidents in 2018 were 4.67 lakh and and deaths were recorded at 1.51 lakh.
By : PTI
| Updated on: 27 Jul 2021, 16:31 PM

Nitin Gadkari aims to reduce road accidents by 50 per cent before 2024. (File photo for representational purpose)

A total of 4,49,002 road accidents occurred in India in 2019, causing 1,51,113 deaths, despite the number of such road mishaps coming down during the year when compared with 2018, Parliament was informed on Monday.

In a written reply to a question in the Rajya Sabha, Road Transport and Highways Minister Nitin Gadkari said that road accidents are occurring due to multiple causes such as over speeding, drunken driving, consumption of alcohol, driving on wrong side/lane, indiscipline, fault of the driver of motor vehicle, use of mobile phones during driving, etc.

(Also read | Cameras to catch drivers on phone, without seatbelt launched for the first time)

Gadkari said his ministry has implemented a scheme for undertaking publicity measures and awareness campaigns on road safety to create awareness among road users through the electronic media, print media, NGOs etc.

He added that high priority has been taken to identify and rectify black spots (accident prone spots) on national highways. Gadkari noted that safety standards for automobiles have been improved and the ministry has notified fitment of speed limiting devices on all transport vehicles. 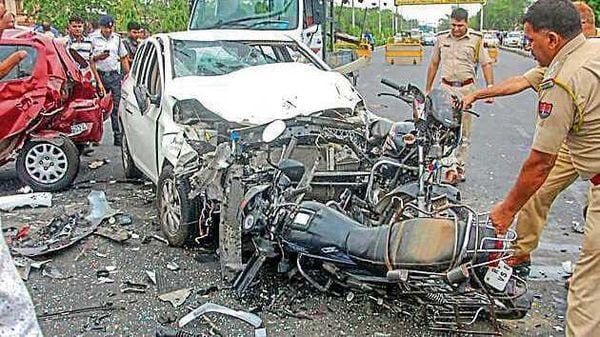 Replying to a separate question, he said the government does not collect data on removal of liquor shops situated along the national highways as this is a state subject. The Supreme Court of India has issued directions regarding stopping the grant of licences for sale of liquor along national and state highways and over a distance of 500 metres from the outer edge of the national or state highways or of a service lane along the highway. "Further, Section 185 of Motor Vehicles Act, 1988 provides for punishment of imprisonment or fine or both for the offence of drunken driving cases," the minister said.

Replying to another question, Gadkari said 536 persons killed and 1,655 persons injured under category of 'hit and run' in Delhi in 2019.